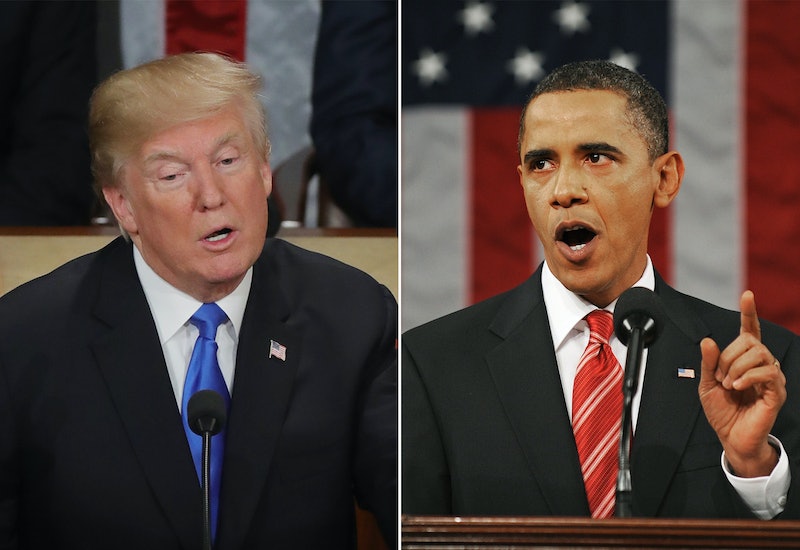 After Donald Trump delivered his first State of the Union address, some might be wondering how it fared compared to his predecessor, Barack Obama. In one glaringly obvious case, Trump's SOTU speech differed from Obama's SOTU address in a major and undeniable way. When it came to mentioning women, Trump said "woman" or "women" exactly zero times. Compared to Trump, Obama said "women" six times and "woman" twice in his first State of the Union speech in 2010.

During his speech, Trump touched on the issues of immigration, economics, national defense, foreign policy, employment, and more. But while his topics seemed to be diverse, the president did not mention "women" directly.

In 2010, Obama first mentioned both "men and women" when he spoke of economic distress in the country.

[F]or every success story, there are other stories, of men and women who wake up with the anguish of not knowing where their next paycheck will come from; who send out resumes week after week and hear nothing in response.

Then Obama mentioned "men and women" while speaking of the American War on Terror as he said his government would "support the rights of all Afghans — men and women alike." While Trump spoke of North Korea and dictatorial regimes, he did not mention women while addressing the country's citizens.

Furthermore, Obama mentioned something that Trump did not at all and that is equal pay for women.

We're going to crack down on violations of equal pay laws — so that women get equal pay for an equal day's work.

When it came to foreign policy, Obama made a special mention of both American "men and women" in Iraq and Afghanistan.

Tonight, all of our men and women in uniform — in Iraq, in Afghanistan, and around the world — they have to know ... that they have our respect, our gratitude, our full support.

Obama also spoke of the women in Afghanistan:

[W]e stand with the girl who yearns to go to school in Afghanistan; why we support the human rights of the women marching through the streets of Iran; why we advocate for the young man denied a job by corruption in Guinea. For America must always stand on the side of freedom and human dignity. Always.

Despite having a speech that covered a reported five pages, according to chief national CNN correspondent John King, Trump did not mention equal pay neither did he specifically mention other gender-relevant initiatives. In contrast, Obama also mentioned "women" when he placed emphasis on accountability for corporations.

Each of these institutions are full of honorable men and women doing important work that helps our country prosper. But each time a CEO rewards himself for failure, or a banker puts the rest of us at risk for his own selfish gain, people's doubts grow.

Speeches differ. In politics, they often determine whether a leader wins or loses a crowd. After all, people decide which speeches they enjoyed and agreed with as well as which speech they found disagreeable or simply uninspiring. Certain words come up and some words don't. For instance, during Bill Clinton's SOTU address in 1994, the words "health" and "care" came up frequently. During Gerald Ford's SOTU speech in 1975, words like "energy" and "oil" came up. During Lyndon Johnson's address in 1964, words like "employment," "poverty," and "public," were prominent. The list goes on.

That said, it's worth noting that inclusive speeches tend to leave bigger and more unforgettable impressions. In that case, Trump's speech seems to have missed the mark.