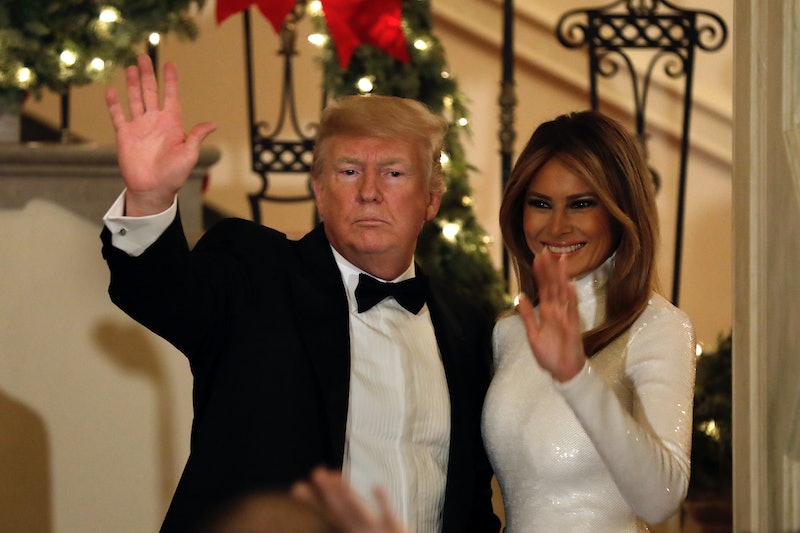 According to the New York Post, Donald Trump visited troops in a war zone for the first time as president on Wednesday when, in a surprise trip, he and Melania Trump went to Iraq. The whereabouts of the president came into question after he didn't tweet for more than 17 hours, the Post reports, and his surprise visit to Iraq comes amidst a partial shutdown of the U.S. government.

Donald and Melania Trump met with troops at the Al Asad Air Base west of Baghdad, Reuters reports, accompanied by a handful of aides, reporters and Secret Service agents. It was the first time Trump has visited troops in a conflict zone since taking office nearly two years earlier; according to Reuters, he was "looking for some positive headlines" after the stock market suffered its worst Christmas Eve trading day in U.S. history.

In addition to the Dow Jones Industrial Average's staggering 653-point drop on Monday, several other developments made the week before Christmas an extremely chaotic one for Trump and Washington D.C. in general. Earlier, Trump abruptly announced that he is withdrawing American troops from Syria, a decision that reportedly caught top Pentagon officials flat-footed. Immediately thereafter, Defense Secretary James Mattis announced his resignation, explaining in a letter that his foreign policy views don't "align" with Trump's. The top U.S. envoy to Syria also resigned over the decision.

In addition, the U.S. government entered a partial shutdown after Trump refused to sign a spending bill that didn't include funding for a U.S.-Mexico border wall. Senate Democrats say they won't vote for a government spending bill that includes any wall funding; Trump has demanded $5 billion in funds to build the wall, although his own administration estimates that the wall would in fact cost around five times that to build. On Christmas Day, Trump falsely claimed to have given out "a 115 mile long contract" for a segment of the wall (the president does not award contracts).

Capping off a week of bad headlines for the Trump administration, an 8-year-old Guatemalan boy who'd been detained by immigration officials died in U.S. custody on Christmas Eve.

President Bush sent American troops to Iraq in 2003, an invasion Trump supported at the time but later claimed to have opposed. According to the military, there are still around 5,200 American troops in the country, which collapsed into disarray in the years following the U.S. invasion.

During his visit Wednesday, Trump said that he has "no plans at all" to withdraw the remaining American soldiers on the ground in Iraq, according to the Associated Press, explaining that he may use the country as a staging ground from which to launch operations in Syria.

“If we see something happening with ISIS that we don’t like, we can hit them so fast and so hard they really won’t know what the hell happened,” Trump said on Wednesday, according to the New York Times. A week earlier, Trump claimed that ISIS had already been defeated in Syria.