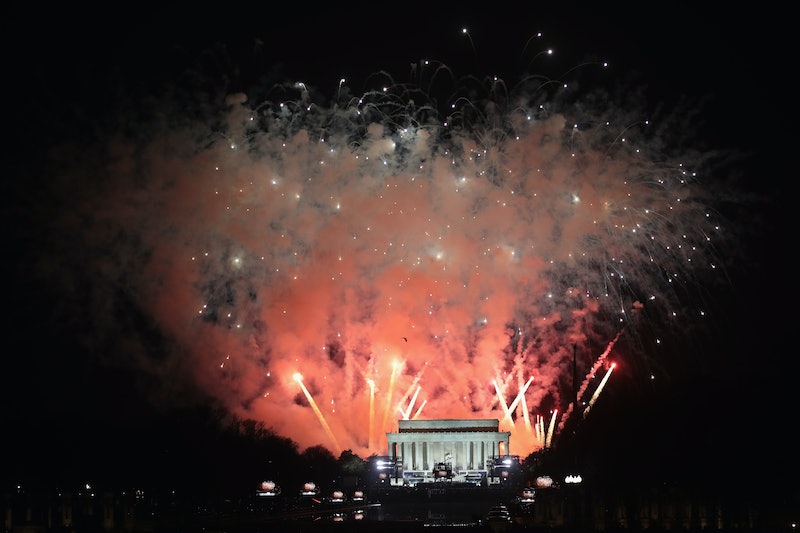 President Donald Trump has reportedly taken over Washington, D.C.'s upcoming Fourth of July festivities, according to a new report from The Washington Post. But Trump's Fourth of July plans may end the celebration's long-held tradition of nonpartisanship. According to The Washington Post, Trump's desire to have a starring role in the day's events could turn the commemoration of America's independence into a Trump 2020 campaign rally.

Frustrated about his inability to host a massive military parade on par with France's Bastille Day celebrations, Trump has reportedly settled for turning the focus of what has long been a nonpartisan celebration of the nation's independence to him and his presidency. The president is "making tentative plans to address the nation from the steps of the Lincoln Memorial" as part of this year's summer holiday celebration, The Washington Post reported top Tump administration officials have said. Trump also reportedly plans to move the city's annual Fourth of July fireworks display from its traditional spot on the National Mall so that it is nearer to the Potomac River, the paper reported. Bustle has reached out to the White House for comment.

Interior Secretary David Bernhardt, the official reportedly tasked with planning the fete, told The Washington Post that Trump was excited about having a hand in planning this year's event. "I think the president is excited about the idea, and we're working hard on it, and I think it could be very, very meaningful," Bernhardt said. "The president loves the idea, as probably all Americans do, of celebrating America on the Fourth of July, or thereabouts."

But not everyone is keen on Trump's reported plan to make himself a part of the day's festivities. "It's not about any one president. It's about how our nation came to be, because of a hardy band of brave men and women," House Subcommittee on Interior, Environment and Related Agencies Chair Rep. Betty McCollum told The Washington Post. "It's not about any one person, it's about 'We, the people.' And if the president moves to make this about him, I think he will find the American public disappointed and angered by it." According to the paper, McCollum expressed concern that Trump may end up polarizing a traditionally unifying holiday.

Democratic 2020 presidential candidate Sen. Kamala Harris has also appeared hesitant about Trump's reported plans for the capital's Fourth of July celebration. "I think the President needs to realize it's America's birthday, not his birthday," The Hill reported she said while on the campaign trail earlier this year.

This isn't the first time Trump reportedly wanted to make some changes to how the country's capital celebrated the Fourth of July. Earlier this year, Trump urged folks to hold off on making any concrete plans for the Fourth of July holiday, promising to host an event they wouldn't want to miss.

"HOLD THE DATE! We will be having one of the biggest gatherings in the history of Washington, D.C., on July 4th," the president tweeted in February. At the time, Trump said only that his event would be called "A Salute To America" and would include entertainment, a major fireworks display, and "an address by your favorite President, me!"