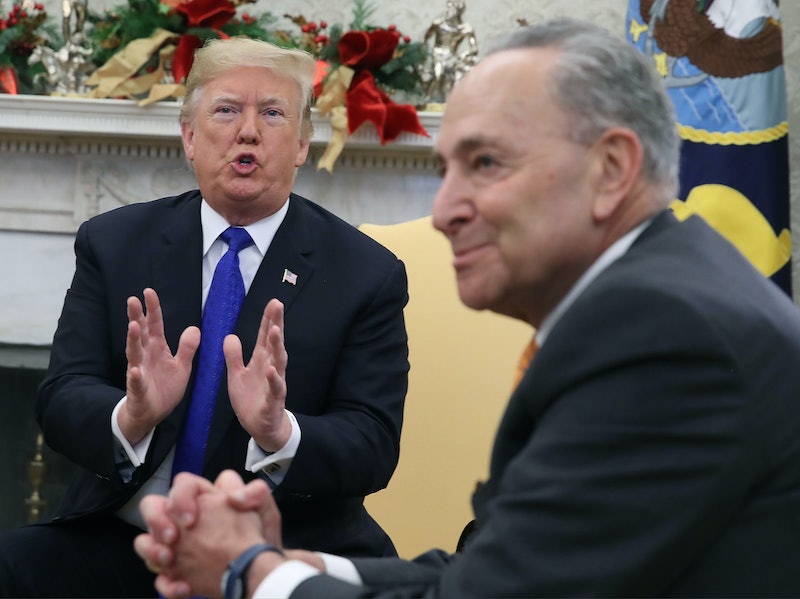 While I'm not sure Donald Trump has ever seen an episode of HBO's hit series Game of Thrones, someone at the White House has clearly seen at least one episode judging by the memes Trump keeps circulating. But Trump's latest Game of Thrones meme has more than one person rolling their eyes.

"Enough with the memes," Senate Minority Leader Chuck Schumer tweeted Saturday in response to a political meme the president posted earlier in the week to Instagram and then, a few days later, to Twitter. "Just quit hurting innocent people and re-open the government."

In the meme, which clearly draws inspiration from Game of Thrones, Trump glowers from behind what looks like a comb but is more likely meant to be his steel slat border fence. Emblazoned above the barrier in a Game of Thrones-inspired font is the phrase, "THE WALL IS COMING."

But Schumer wasn't the only one on social media to find Trump's Game of Thrones-inspired propaganda meme to be tiresome and poorly thought out. "So....... Who's gonna tell him?" Washington Post and MSNBC contributor Jonathan Capehart asked in a tweet.

"The wall specifically didn't work in that show, idiot," journalist Lauren Duca tweeted. Others simply tweeted scenes of the border wall in Game of Thrones crumbling to the ground as was seen in Season 7.

Others argued that it may be more fitting than first thought due to similarities between the Trump administration and the TV show. "Trump using the Game of Thrones font for all his memes is truly fitting," writer and comedian Nick Jack Pappas tweeted. "It's the story of a wall that doesn't work, and the only group that's lost more characters than Game of Thrones is the Trump Administration."

In one tweet, filmmaker Jeremy Newberger laid out a hypothetical conversation overheard in the White House: "TRUMP: People love my Game of Thrones posters. What's this show about anyway? AIDE: A rich incestuous family screwing up the world with their power-plays and deception. Oh and there's a Wall."

Others circulated a meme featuring special counsel Robert Mueller — who is currently leading an investigation into allegations of collusion between Russia and the Trump campaign — dressed as Ned Stark. "Mueller is coming," the meme reads.

Moreover, while some argued that the wall in Game of Thrones stood for a good long time and was only brought down when a dragon appeared on the scene, others argued that wildlings (some those the wall meant to keep out, for those of you unfamiliar with the show) found ways around the wall even when it stood. Others simply moved to introduce the wisdom of Jon Snow, a Game of Thrones character who argues that those born on the other side of the wall aren't monsters.

It should be noted that this isn't the first time Trump has brought out some Game of Thrones-style propaganda. In early November, he tweeted a meme featuring an image of himself and the phrase "SANCTIONS ARE COMING NOVEMBER 5." At the time, HBO's official Twitter account asked, "How do you say trademark misuse in Dothraki?" and while I'm not saying that's a response to Trump's poster, I'm not saying it's not either.

Interestingly, Trump brought a hard copy version of his "SANCTIONS ARE COMING" poster to a Cabinet meeting earlier this month. It's unclear if he'll be bringing a hard copy of his "THE WALL IS COMING" meme to his next meeting with Schumer and Speaker of the House Nancy Pelosi.