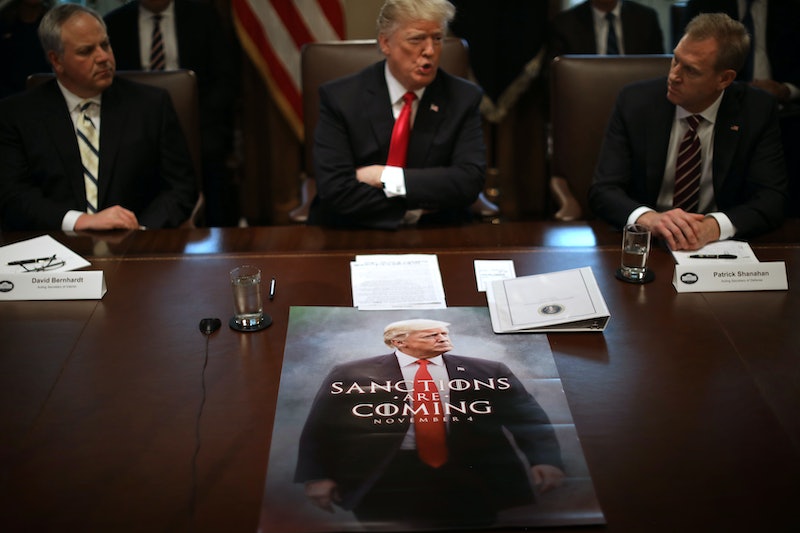 Every now and then, politics and entertainment cross over in an unexpected way. On Wednesday, President Donald Trump brought a poster of his Game of Thrones meme that he tweeted out a while ago to a cabinet meeting in the Roosevelt Room at the White House. And it looks like some people couldn't quite seem to wrap their heads around it.

The knock-off poster featured a spin on the original "winter is coming" line from the Game of Thrones series. It featured Trump prominently, with the words, "SANCTIONS ARE COMING NOVEMBER 5" emblazoned on it. Trump originally tweeted the meme in November 2018, with indirect reference to the Iran nuclear deal. Back in May, Trump blasted the agreement as the "worst deal ever negotiated."

With his faux Game of Thrones poster displayed on the table on Wednesday during the meeting, Trump blamed the Democratic Party for the ongoing partial government shutdown and spoke about his demand for a border wall that would need some $5 billion for construction.

Naturally, the entire visual left some people on Twitter confused and irritated. Parker Molloy, an editor for Media Matters, wondered aloud on the social network, "Is that... a poster-sized print out of the dumb Game of Thrones meme he tweeted?"

And if you were wondering whether 2019 would bring clarity, artist and writer Rob Sheridan has an answer for you. "[Trump] printed out his own ridiculous Game of Thrones meme and had it laid out on the table in front of him, in case you were worried 2019 wasn't going to get real, real f*cking stupid," Sheridan tweeted.

A president bringing a poster-size meme to a cabinet meeting as a partial government shutdown goes on is certainly going to surprise some people. And if you're one of those people, Haaretz editor Avi Scharf just wants to reassure you that you're not imagining things.

Global News' Josh Elliott tweeted that he didn't know what was "crazier." It was between "Trump using a stupid Game of Thrones reference to threaten sanctions" or "he's obviously had that poster since AT LEAST October," according to Elliott.

According to Reuters' White House correspondent Jeff Mason, Trump said that "walls work" while his poster laid in front of him on Wednesday.

It's worth looking at a tiny bit of information about the show, so consider this a spoiler alert. If you're actually familiar with the popular Game of Thrones, you might know that the massive wall in the show doesn't work. And this much was caught by some Twitter users, including BuzzFeed's Brandon Hardin.

University of Denver's Seth Masket even shared a clip of that particular moment when the behemoth wall turns to icy dust.

Now, using a particular show's line for your own purposes doesn't always come without potential legal consequences. In November 2018, after Trump shared his spin on the "winter is coming" line, HBO tweeted an indirect warning to the president: "How do you say trademark misuse in Dothraki?" So far, it doesn't look like Trump got the message.