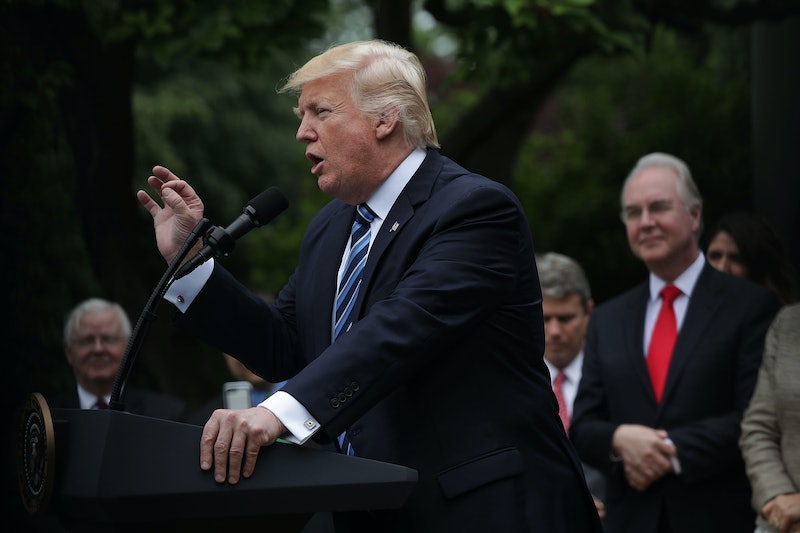 President Donald Trump hasn't even been in office for six months, but he has already done considerable damage to abortion rights worldwide. Following his electoral win, Republican lawmakers around the country began passing anti-abortion legislation, introducing both 20-week statewide bans as well as less-popular six-week "heartbeat bill" bans. Then, Trump announced his decision to reinstate the Mexico City Policy. On Monday, Trump plans to announce his decision to expand the global gag rule by allocating $8.8 billion in funding to the "Protecting Life in Global Health Assistance" bill.

In 1973, the Helms Amendment prohibited the use of U.S. taxpayer money to be used to fund international abortion services. President Ronald Reagan established The Mexico City Policy in 1984 to withhold U.S. funding from international NGOs that performed, promoted, or discussed abortion services. Reagan introduced the policy during a conference in Mexico City, hence the name. However, its nickname — the global gag rule — comes from its requirement that NGOs that receive U.S. funding pledge not to even discuss abortion services, let alone offer it.

Trump's initial announcement to reinstate the Mexico City Policy in January was significant in that it went farther than other previous Republican presidents. His version of the policy not only includes family planning organizations, but all global health organizations that receive U.S. funding.

This means that foreign organizations that focus on malaria, tuberculosis, HIV/AIDs, or even tropical diseases and vaccinations will be subject to the non-abortion standard in order to receive funding, according to Vox. The rule will affect 15 times more organizations than the previous iterations.

While this might be seen as a win for the GOP and evangelical Trump supporters who are interesting in eliminating abortion, it is a terrifying step for U.S. aid around the world. Denying organizations funding just for talking about abortion is a step in the wrong direction, and allocating more money to organizations who do not talk about or provide abortion will only incentivize fewer global health organizations to provide this essential care.

Unfortunately, there are organizations that will suffer greatly because of this policy, like Marie Stopes International Uganda, which receives 94 percent of its funding from USAID to provide contraception to women in the area. With Trump's new policy, their funding will be threatened, as will the funding of many other global health organizations.