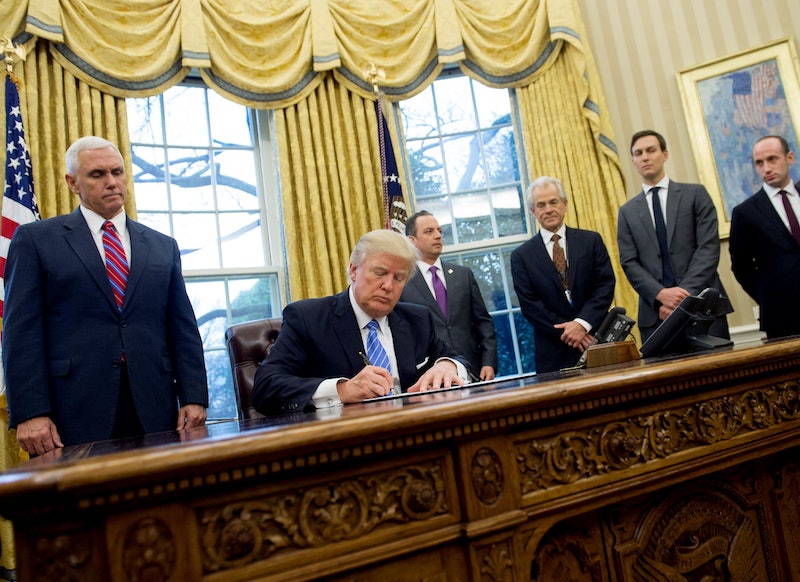 On Monday, President Trump reinstated the Global Gag Rule, an executive order that prevents international health organizations from providing abortions to patients, mentioning abortions to the people they treat, or lobbying against local abortion restrictions — and if they do, they will not receive U.S. foreign aid (hence the "gag").

But while the rule has been in effect before, that doesn't mean that it is harmless or won't make any real impact on the lives of those who count on these international organizations for health services. In fact, when instated, the Global Gag Rule often forces critical women's health organizations to close, leaving women in the developing world with less access to contraception and health care in general.

The Global Gag Rule only impacts non-U.S.-based organizations that receive U.S. funding, and it doesn't just require that these organizations not use U.S. money to perform abortions or support reproductive rights. Another law, the Helms Amendment, first enacted in 1973, already prevents international health organizations from using U.S. federal funds to pay for abortions or counseling patients on abortion as an option.

The gag rule bans these organizations from using any money to do these things, including money received from other governments or organizations who gave their funds with no such stipulations. In short, the Global Gag Rule basically blackmails organizations out of admitting to their patients that abortion exists.

And don't think that these organizations can simply go on without U.S. funding. As The Guardian reports, "The US is the single largest donor to global health efforts, providing nearly $3bn toward health efforts through the United States Agency for International Development (USAid) alone."

So who stands to lose funding, now that the Global Gag Rule has been implemented yet again? As Sneha Barot and Susan A. Cohen explain in their article, "The Global Gag Rule and Fights Over Funding UNFPA," "When enforced, it has led to the closing of some of the developing world’s most effective family planning programs."

What does this mean in practical terms? According to Population Action International (PAI)'s report on the effects of previous Global Gag Rules, removal of funding can leave women in other countries not only unable to access abortion, but unable to even receive basic health care.

[T]he Planned Parenthood Association of Ghana (PPAG), the country’s oldest and largest provider of reproductive health services, lost $200,000 in USAID funding in 2003 when they rejected the Gag Rule. As a result, PPAG laid off 67 key staff members and reduced nursing staff by 44 percent, leading to a 40 percent reduction in family planning use by those served by the organization. More than 1,327 communities in Ghana were affected by the cuts.

And the consequences for violating the Global Gag Rule are very real. As The Guardian reported, "A spokeswoman for International Planned Parenthood Federation (IPPF) said the group will not abide by the gag rule and stands to lose up to $100m it currently receives from the US."

And all of this, of course, does not actually keep women from having abortions, especially since women in Gag Rule countries have a more difficult time accessing contraception. According to PAI, "A 2011 study found the Gag Rule to be associated with increased abortion rates in sub-Saharan African countries... Abortion rates began to rise noticeably only after the Gag Rule was reinstated in 2001." And since women cannot obtain abortions from qualified practitioners, they often must seek illegal abortions, which can have grave health consequences. As the World Health Organization documented, 21.6 million women have unsafe abortions each year, with 18.5 million of them occurring in developing countries — and 47,000 of those women die from those unsafe abortions annually.

The Global Gag Rule is much more than a piece of political theater — it has real world impact, and devastating consequences.