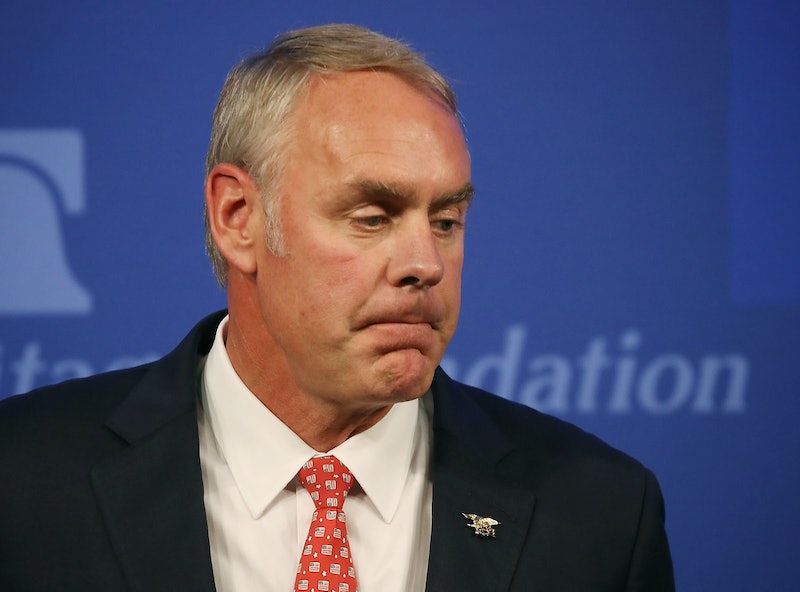 The Trump administration's secretary of the interior came under fire once again on Friday for his use of public funds. Ryan Zinke is spending $139,000 to renovate his office doors, the Associated Press reports. The news is raising eyebrows, despite assertions from the secretary's spokeswoman that Zinke was unaware of the project until now.

The plan involves installing three new sets of double doors, one of which opens onto a balcony looking out onto the National Mall and leaks terribly during storms, an Interior Department official told the Associated Press. The balcony's new entry will be outfitted with glass transoms and fiberglass doors and frames. One of the other doors — which opens on a hallway — does not currently lock.

Heather Swift, a spokeswoman for Zinke, told the AP that the secretary didn't know that this renovation was planned until the press contacted him. "The secretary was not aware of this contract but agrees that this is a lot of money for demo, install, materials and labor," she said. An official told the AP that the project was planned around two years ago, well before Zinke took office in March 2017.

But these reassurances aren't convincing everyone of Zinke's frugality, especially in light of the series of notoriously expensive helicopter trips he took last year. In December, Politico reported that the secretary had spent $14,000 over the summer to take him and his aides to and from events near Washington, D.C. via helicopter.

"The secretary must believe he was handed a blank check the day he was confirmed, but the American public won’t tolerate his reckless spending habits," Shripal Shah of the Democratic political action committee American Bridge told the AP on Thursday. In reference to the $139,000 door project, he said, "This opens the door to more troubling questions about how Zinke is wasting taxpayer money."

To partially explain the renovation's price tag, Swift said, "Between regulations that require historic preservation and outdated government procurement rules, the costs for everything from pencils to printing to doors is astronomical. This is a perfect example of why the secretary believes we need to reform procurement processes." Price has advocated for dramatically cutting the Interior Department's spending (which, for many, adds to the irony of his costly trips).

In referencing the fact that renovating federal government offices tends to be highly expensive, Swift has a point. In 2007, for example, Bush's then-Interior Secretary Dirk Kempthorne spent $222,000 to redo his personal bathroom. The case was so extreme that it prompted Yahoo to declare: "Maybe the Pentagon's legendary $600 toilet seat was a bargain."

Yahoo was referring to a scandal in 1985 when the Defense Department was criticized for paying Lockheed $640.09 for each toilet seat on its P-3 Orion planes. When the news went public, a spokesperson for the Pentagon at the time responded by saying that the military wasn't sure how much the parts for these toilets should cost, "but we obviously feel this is too much."

Clearly, the government's history of wasting taxpayer money is long. But it doesn't happen equally under every administration. President Obama, for example, spent around $100 million on travel during his eight years in office, which is an average of about $12.5 million a year. The latest count taken by the conservative group Judicial Watch in January — which wasn't comprehensive, because the recent expense records for the last few months hadn't yet been released — found that President Trump spent around $13.5 million on travel during his first year.

Several members of Trump's administration have been accused of wasting taxpayer money. Scott Pruitt, head of the Environmental Protection Agency, took a series of trips with his aides last June that cost at least $90,000. He's been criticized for deciding to fly first class in order to avoid confronting unhappy constituents. Tom Price resigned as Health and Human Services Secretary in September after news broke that he had spent over $1 million on travel in less than seven months.