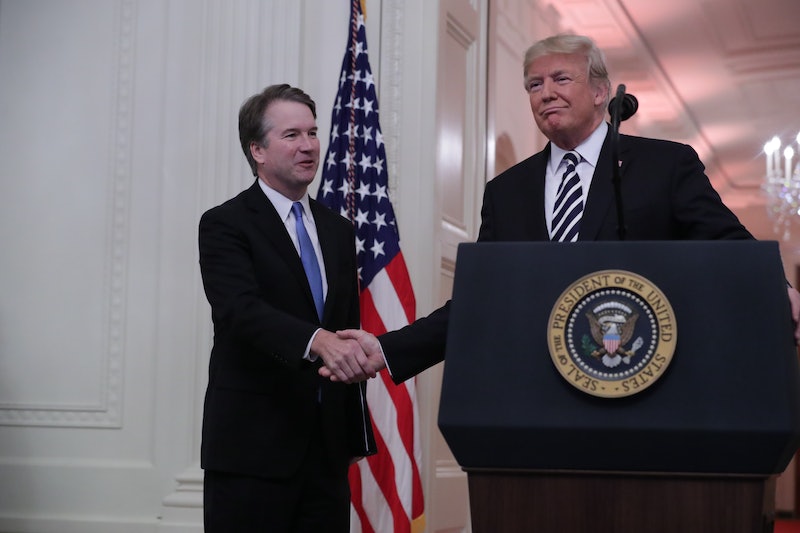 Over the course of 2018, President Trump successfully appointed 66 judges to America's courts, which is 17 more than the number of judges nominated and confirmed by Barack Obama at the same point in his presidency. It's probably no surprise that Trump's judicial nominees in 2018 were overwhelmingly white — and extremely conservative.

According to a study by the Alliance for Justice, 92 percent of the judges confirmed by the Senate in 2018 are white, and 76 percent are men. They're also young: The median age of Trump judicial nominees who were confirmed in 2018 is 49, and some of them are in their 30s. Because these are lifetime appointments, the relatively young age of Trump's judicial appointments will have significant ramifications for American law long after Trump has left office.

Those numbers only apply to the judges confirmed by the Senate in 2018; since the start of his presidency, Trump has successfully appointed 84 judges in total, according to NBC News.

In addition, several of Trump's judicial nominees were confirmed by the Senate despite having been deemed "Not Qualified" to serve by the American Bar Association. Those judges are Grasz, Eight Circuit Court of Appeals Judge Jonathan Kobes, Kansas District Court Judge Holly Lou Teeter, and Western District of Oklahoma Judge Charles Goodwin.

Trump's success in filling the judiciary is in large part thanks to Senate Majority Leader Mitch McConnell, who's openly said that his "top priority" is confirming as many of Trump's appointees as possible. McConnell also played a role in making these appointments possible by launching a concerted effort to block Obama's appointees from getting confirmed before Trump took office.

Not all of Trump's judicial nominees have been confirmed, however. Several of them were withdrawn, or formally voted down, after even the Senate found them too odious to give lifetime appointments.

Rejected Trump nominees include Jeff Mateer, who said that transgender children are evidence of "how Satan’s plan is working;" Thomas Farr, who defended a North Carolina voting law that, in the words of the federal judge who struck it down, was designed to "target African-Americans with almost surgical precision" in an attempt to prevent them from voting; and Ryan Bounds, who once wrote that "there is nothing really inherently wrong with [a] University failing to punish an alleged rapist — regardless of his guilt."