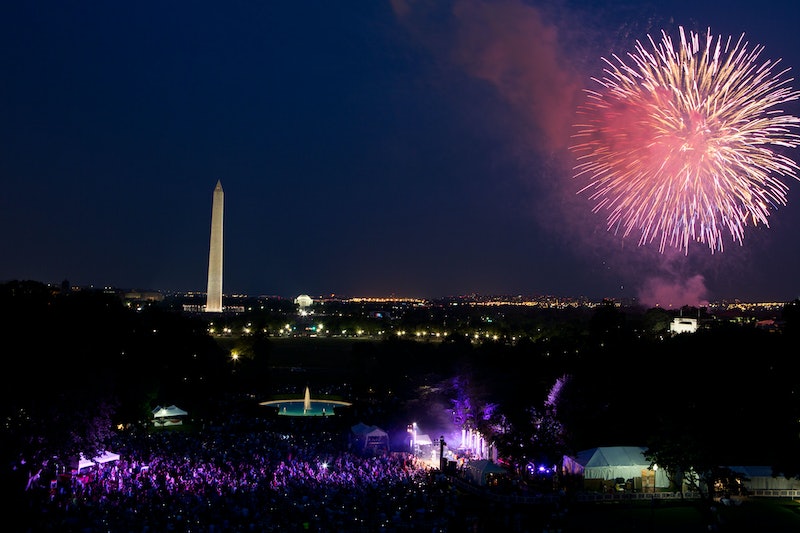 There will certainly be fireworks and American flags, but this Fourth of July won't be like every other Independence Day that's taken place in the nation's capital. This one will be different, because President Donald Trump is holding a new sort of presidential event — his “Salute to America” celebration in Washington D.C. Here are all the questions you have about Trump's July 4 event, answered.

Back in February, Trump announced the Salute to America event in his usual way: with a tweet.

"HOLD THE DATE! We will be having one of the biggest gatherings in the history of Washington, D.C., on July 4th," he wrote. "It will be called 'A Salute To America' and will be held at the Lincoln Memorial. Major fireworks display, entertainment and an address by your favorite President, me!"

The Salute to America drew immediate derision on Twitter, as numerous commentators pointed out that Washington D.C. celebrations on July 4 were already sort of an ingrained habit. As details about it began to slip out, though, it quickly became clear that this wouldn't exactly look like the celebrations in years past. As the day approaches, here's all we know about the upcoming event.

When Exactly Is The Event?

There are various Independence Day events scheduled throughout July 4, according to the National Park Service (NPS) — a parade in the afternoon, a concert at night, and, of course, the fireworks display. Salute to America will take place between 6:30 and 7:30 p.m., but crowds can start gathering at 3:30 p.m. when the gates open.

Where Will It Take Place?

Trump will be speaking from the steps of the Lincoln Memorial, according to the NPS, so people will be able to watch from the National Mall.

Do You Need Tickets To Attend?

No, you can go without a ticket, according to CNN — but you won't be able to get into the special VIP area closest to the Lincoln Memorial. The VIP section will be reserved for family, friends, and members of the military whom the White House has extended tickets to, and it will stretch from the memorial to "about midway down through the Reflecting Pool," according to a special agent heading up the U.S. Secret Service Washington Field Office.

Everywhere else will be free and open to the general public, however.

What Will Happen At The Event?

The event will be military in theme. According to DCist, the Department of the Interior released a statement calling it a “celebration of America’s military with music, military demonstrations, and flyovers." If you attend, you'll hear various military bands and see flyovers by the Air Force One plane and the Navy's Blue Angels, according to CNN, but not many other details have been released.

Will There Really Be Tanks?

Trump wants tanks there, according to a Washington Post report, but it's still not entirely clear whether there will actually be tanks displayed at the event. This request has met with resistance from numerous directions — the D.C. Council voiced its opposition on Twitter, for example, and used the same tweet to cited a Defense Department memo stating that having tanks in the streets could cause too much "damage to local infrastructure."

But even if the tanks don't make the cut, there could still be other armored military vehicles, per The Post.

Neither the White House nor the Department of Defense has come out with a number, according to The Washington Post, but it's likely to stretch well into the tens of millions. After all, the last military parade that Trump planned was canceled after it came out that it would cost around $92 million, The Post reported in 2018.

Even without knowing the exact cost of this one, though, you can make some estimates based on the costs of, for example, the personnel required for security, set up, and clean up, and the costs of operating the military vehicles. As The Post wrote, just one of the Blue Angels fighter jets costs $10,000 per hour, and the Air Force One plane costs $140,000 per hour.

Does This Sort Of Thing Usually Happen?

The perception has already arisen that Trump will be polarizing the very celebration that is meant to unite all Americans. Military parades including tanks and other armored vehicles are also far from typical in the United States.

What Are People Saying About It?

The event is drawing a lot of varied criticism. The chair of the Coalition to Protect America’s National Parks, Phil Francis, told The Washington Post in a statement that it was "irresponsible" to ask the NPS to shoulder any costs of putting on the event when the agency has a huge maintenance backlog in parks across the country.

An op-ed in The New York Times referred to Trump's inclusion of himself into the celebrations a move to "[hijack] America’s birthday party."

There are also those preparing to mock the event, with a possible appearance by the "Trump Baby" balloon that has showed up to protest Trump at numerous events so far.

While the White House has not released its own statement on the event, the interior secretary seems to be speaking on behalf of the Trump team.

“This is going to be a fantastic Fourth of July," Secretary of the Interior David Bernhardt told The Washington Post, "With increased access across the National Mall for the public to enjoy music, flyovers, a spectacular fireworks display, and an address by our Commander-in-Chief.”

More like this
Watch Jacinda Arden’s Devastatingly Honest Resignation Speech
By Sam Ramsden
25 Galentine's Day Games To Play On Zoom With Your Long-Distance Besties
By Mia Mercado
30 Sweet Valentine's Day Caption Ideas For Long-Distance Relationships
By Syeda Khaula Saad and Carolyn Steber
17 Valentine's Day Tips For New Couples, Straight From Relationship Experts
By Carolyn Steber
Get Even More From Bustle — Sign Up For The Newsletter
From hair trends to relationship advice, our daily newsletter has everything you need to sound like a person who’s on TikTok, even if you aren’t.