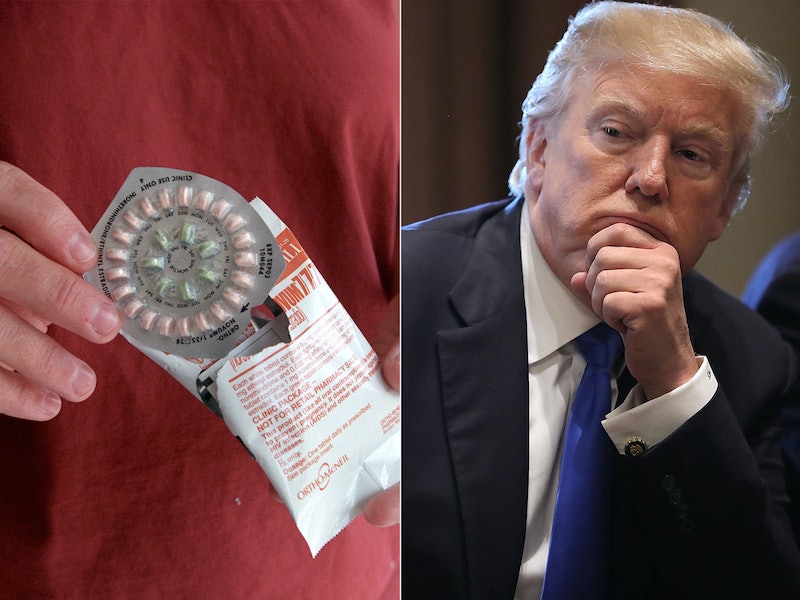 The U.S. Department of Health and Human Services has launched a new division designed to allow health care professionals to refuse to treat patients or perform procedures that they're morally against. Doctors could withdraw from providing abortion and treating transgender patients, and these "conscience-based protections" by the Conscience and Religious Freedom Division could mean birth control access will be at risk.

Conservative Christian groups have regarded contraception as a threat to religious freedoms for many years. This was especially clear in the 2014 Hobby Lobby case, when the Supreme Court ruled that for-profit companies like Hobby Lobby could not be required to include birth control coverage on their employees' health insurance, on the grounds that such a requirement violated religious freedoms. Then, in its first year, the Trump administration started to roll back the Obamacare birth control mandate by issuing a rule that employers were no longer required to provide birth control coverage.

At the annual March for Life in Washington, D.C. on Friday, HHS Office of Civil Rights Director Roger Severino told reporters that “the protection of conscience is a freedom that for too long has not been given the attention it deserves." However, these "conscience-based protections" are still a broad category; they could apply to doctors who do not want to provide hormone therapy to transgender patients, an example that Severino did not rule out.

These protections could also apply to doctors or pharmacists who do not want to provide birth control prescriptions or other methods of contraception. In a statement sent to Bustle, Susan Inman, chief counsel for federal policy and advocacy at the Center for Reproductive Rights, indicated that this rule could set a dangerous precedent.

"Among its many problematic provisions, the regulation lacks a medically accurate definition of abortion, which could open the door for anti-contraception extremists who believe that certain forms of contraception constitute abortion to refuse to provide contraception or contraceptive coverage," Inman says.

The new rule that the HHS is proposing aims "to ensure that persons or entities are not subjected to certain practices or policies that violate conscience, coerce, or discriminate." Elizabeth Sepper, a law professor at Washington University in St. Louis, told The Atlantic that this new rule means certain states could lose their federal health care budget if they provide procedures like abortion in their health care plans, as that could be seen as discriminating against doctors who don't wish to perform abortions on religious grounds.

According to the Guttmacher Institute, 45 states already allow some health care professionals to refuse to perform abortions, and six states already give pharmacists the right to refuse to fill birth control prescriptions. In other words, the new rule isn't entirely new.

However, the major difficulty the rule creates is that it does not obligate doctors who object to certain procedures on religious grounds to refer their patients to doctors willing to perform those procedures. Just the opposite, in fact — the rule specifies that individuals or entities cannot be required to “endorse, utilize, make a referral to, become integrated with, or otherwise participate in any program or activity to which the organization has a religious or moral objection.”

Dawn Laguens, the executive vice president of Planned Parenthood Federation of America, tells Bustle in a statement that the broad nature of the HHS' proposed rule could have a drastic impact on American patients' health care access.

"Patients' health care will suffer if this becomes law," she says. "No one should have to worry that they won't be able to access basic medical care simply because of their provider's personal, religious, or moral beliefs."