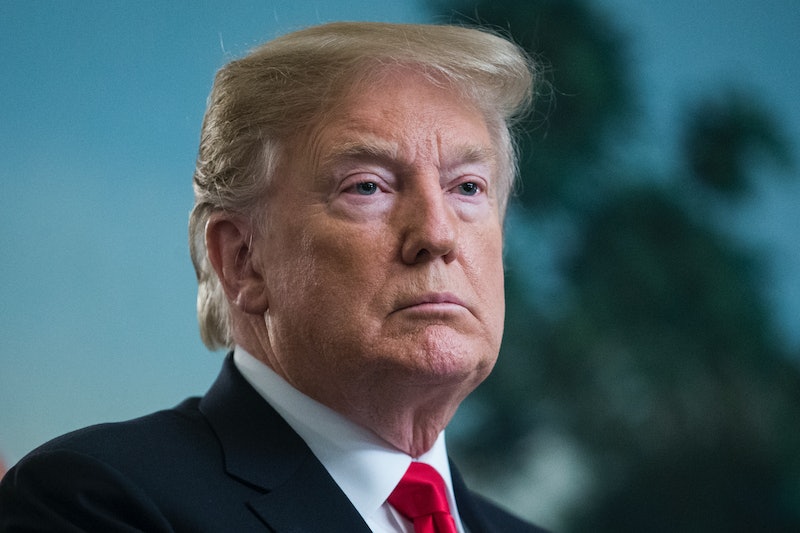 On Tuesday, the president signed an executive order directing federal agencies to examine a somewhat surprising topic. Trump's latest executive order addresses the threat of electromagnetic pulses (EMPs), which are essentially energy bursts produced by solar storms or nuclear explosions, The Hill explained. As the outlet described, Trump's order is focused on ensuring that American infrastructure is protected if a hypothetical EMP event were to occur.

As Business Insider reported, EMPs can occur naturally or they can be produced through a nuclear weapon explosion. Some scientists and elected officials have stressed in the past that crucial American infrastructure — like the country's electrical grid — could be vulnerable to an EMP attack, Bloomberg noted. The outlet added that it's unclear why Trump decided to take immediate action on the EMP issue on Tuesday. Though, the White House told Bloomberg that the order was issued to address EMPs more broadly and was not responding to a particular threat.

As The Hill reported, the executive order requires the Department of Homeland Security (DHS) to identify national systems and infrastructure that could be most affected by an EMP attack. It also requires the DHS and other federal agencies to develop yearly reports outlining how the United States can make its infrastructure less vulnerable to potential EMP attacks, the outlet noted.

The text of Trump's executive order reflected on the potentially debilitating nature of a possible EMP attack — and emphasized the government's duty to address this threat. As the document read:

An electromagnetic pulse (EMP) has the potential to disrupt, degrade, and damage technology and critical infrastructure systems ... EMPs can affect large geographic areas, disrupting elements critical to the Nation’s security and economic prosperity, and could adversely affect global commerce and stability. The Federal Government must foster sustainable, efficient, and cost-effective approaches to improving the Nation’s resilience to the effects of EMPs.

Tuesday's executive order doesn't constitute the first time that the Trump administration has indicated that it considers the EMP threat a security priority. In its 2017 National Security Strategy, the Trump administration suggested that electromagnetic events were one of several threats that could harm American infrastructure. As the report read:

The vulnerability of U.S. critical infrastructure to cyber, physical, and electromagnetic attacks means that adversaries could disrupt military command and control, banking and financial operations, the electrical grid, and means of communication.

However, while the Trump administration believes that addressing the EMP threat should be a priority, not everyone thinks of EMPs as a huge risk. As Vox described in January 2016, it's unlikely that most countries that are considered hostile to the United States could launch nuclear weapons that even reach America, let alone ones that could successfully produce an EMP.

Moreover, Dr. Yousaf Butt, a former senior research fellow at National Defense University, shared similar thoughts with Washington Post in January 2016. Dr. Butt stressed that, while there is a real vulnerability associated with potential EMP attacks, perpetuating one would be a difficult way "for a rogue nation or terrorist" to "achieve harm." As Philip Bump of the Washington Post pointed out, this is the case because "an EMP [attack] requires a very specific combination of things coming together [like an incredibly powerful explosion coupled with a very precise missile] in order to be effective."

Overall, the Trump administration certainly seems to believe that EMPs pose a significant risk to the security of the United States, though some researchers question the gravity of this threat. As federal agencies begin to take action on Trump's executive order, it remains to be seen how scientists and security experts will respond.