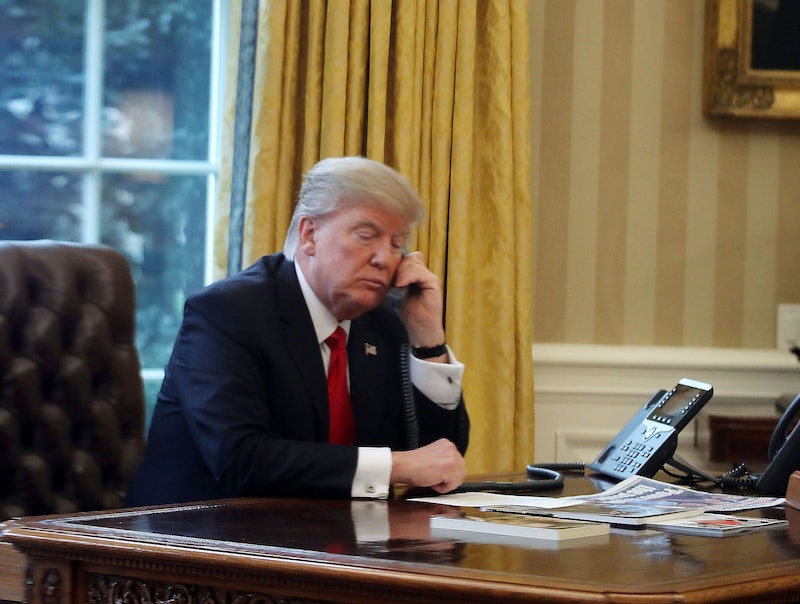 On Thursday, The Washington Post published full transcripts of Donald Trump's phone calls with Mexican President Enrique Peña Nieto and Australian Prime Minister Malcolm Turnbull. Readers instantly seized on noteworthy and confusing quotes from the two exchanges, such as Trump's comments about the border wall with Mexico and reluctance to honor a deal to accept economic refugees from Australia. However, experts are concerned that these transcript leaks of Trump's calls could threaten national security and future transparency.

According to The Huffington Post, the transcript leaks contain pieces of information that would naturally be of public interest, and therefore serve as an instrument of transparency. However, as the publication noted, they also pose a couple of significant concerns.

First, there is the question of future transparency. Although the leaks permit the public to see exactly how the the president communicates with foreign heads of state — which in itself should elicit concern — they may also motivate Trump to ban note-takers from recording future conversations. It would not be the first time; in July, Trump held an informal meeting with Putin during the G-20 summit, and no American interpreters, note-takers, or White House officials were present.

Then, as former George Bush speechwriter David Frum pointed out in The Atlantic, the leaders of different countries need to be able to communicate candidly with one another, without fear of future humiliation or backlash. As a result of the transcript leaks, foreign leaders are always going to feel the need to tread carefully whenever they make calls to Washington. The possibility that these leaks could impact relationships between heads of state has already been reinforced by Jamie Tarabay, a journalist in Australia who has been speaking to national security experts.

Moreover, the transcript leaks could potentially serve to undermine Trump's newly appointed chief of staff, John Kelly, because he was unable to prevent these leaks from taking place. Even though the transcripts themselves did not seem to reveal any highly confidential information that could directly threaten national security, they do make it clear that there is tension and disruption between top White House officials — including Trump himself.

For example, shortly after his call with Turnbull, Trump and his aides insisted that the "fake news media" was distorting the conversation, saying that the call had been civil. However, the transcript of the call reveals that there was actually a significant amount of tension over Trump's reluctance to honor an Obama-era deal.

In the case of Trump, transparency appears to be a double-edged sword. The leaks seem to have been specifically designed to humiliate Trump, portraying him as a rash and reckless leader, while failing to disclose anything that would actually threaten the national security of the United States. In that sense, they give Americans an insight into how their president behaves while doing his job and communicating with foreign leaders.

On the flip side, such leaks could permanently damage trust among White House officials and foreign leaders. Even after Trump leaves office, it is possible that both presidential aides and foreign heads of state will be wary of speaking openly in the president's company. And for a president like Trump, who so frequently denigrates "fake news" and who does not make too many efforts to be transparent, these leaks could mean further limitations to American principles of democracy during his presidency.