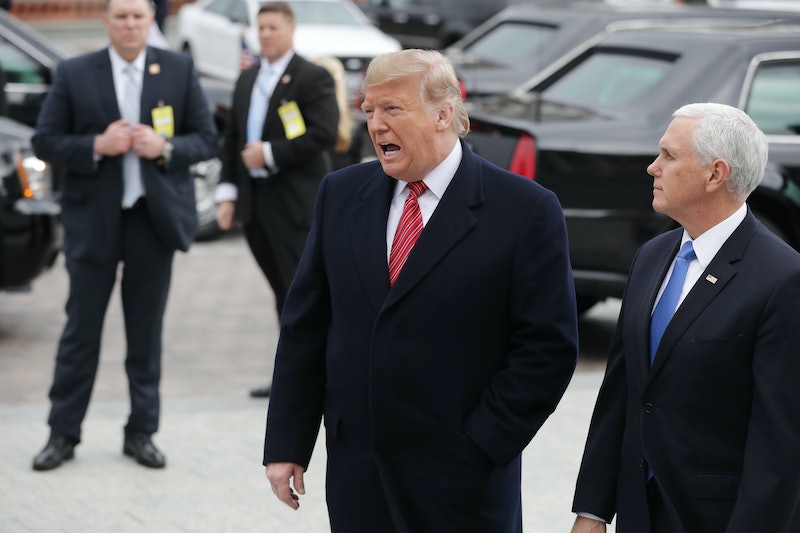 It didn't sound like a pleasant meeting. On Wednesday, Senate Minority Leader Chuck Schumer spoke to reporters about President Donald Trump's meeting with Democrats over the government shutdown, indicating that it didn't go over well. Schumer told the press that the president banged his hands on the table, "and when [House Speaker Nancy Pelosi] said that she didn't agree with the wall, he just walked out and said, 'We have nothing to discuss.'"

Trump also tweeted about the meeting shortly after, saying, "Just left a meeting with Chuck and Nancy, a total waste of time. I asked what is going to happen in 30 days if I quickly open things up, are you going to approve Border Security which includes a Wall or Steel Barrier? Nancy said, NO. I said bye-bye, nothing else works!"

Schumer also characterized this reported outburst as a "temper tantrum."

"We saw a temper tantrum because he couldn't get his way, and he just walked out of the meeting," Schumer said. Bustle has reached out to the White House for comment.

The meeting comes amid a lengthy partial government shutdown, which began at midnight on Dec. 22, 2018. Trump is demanding $5 billion to be included in any federal budget he approves, so as to build his border wall along the south. Democrats have repeatedly opposed Trump's demand to include that money in a bill, and the impasse has led to a federal shutdown impacting hundreds of thousands of government workers across the country.

Soon after Schumer and Pelosi spoke to reporters outside the White House, Vice President Mike Pence told reporters his account of the event. "The president walked into the room and passed out candy," Pence said. "It's true. I don't recall him ever raising his voice or slamming his hands." (Washington Post reporter Seung Min Kim tweeted that Trump gave out Butterfingers, M&M's, and Baby Ruths.)

According to Pence, Trump feels "very strongly" about border security. "You could hear the president say this is a crisis of heart and soul," Pence told reporters. "He feels this passionately."

On Wednesday, Schumer also said, "I asked [Trump] to open up the government. That tomorrow, so many people will have trouble paying their mortgages, paying their bills, dealing with situations when they don't get paid. And I said, 'just why won't you do that?' We'll continue to discuss, we're willing to discuss anything.'"

The New York senator claimed that Trump told them, 'If I open up the government, you won't do what I want.'" Schumer said that it was "cruel" and "callous" and that Trump was "using millions of innocent people as sort of pawns. It's wrong."

The president has been adamant about his demand for border wall funding, which was also one of his presidential campaign promises (although he claimed he would make Mexico pay for the wall). In early January, Schumer said that Trump boasted he would keep the federal shutdown going for "months, even years."

The president affirmed Schumer's account, saying that he "absolutely" had claimed that. "I don't think it will," Trump said, "but I'm prepared."