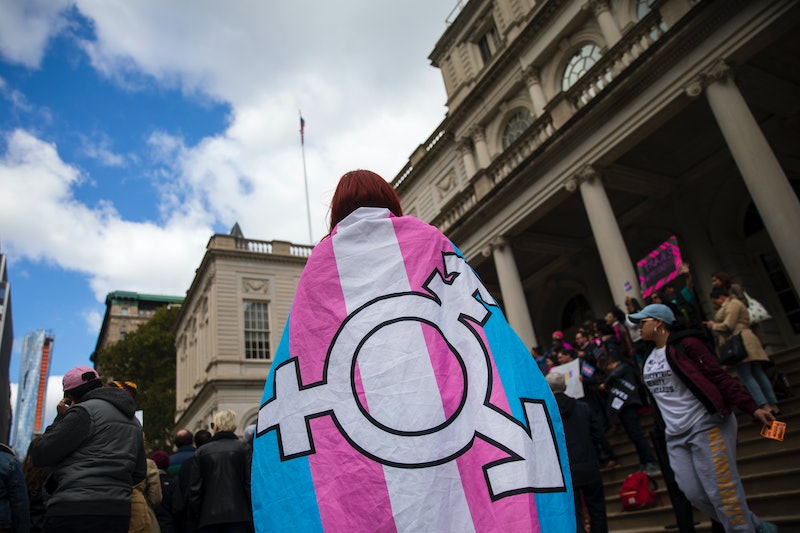 The Trump administration has taken another step toward banning transgender people from military service. In a memo issued on Tuesday, the Department of Defense (DOD) OK'd a policy that would prohibit openly transgender or actively transitioning individuals from registering with or serving in the armed forces after April 12, 2019, according to the Associated Press. The administration has denied that the policy is an actual ban, but trans rights advocates tell Bustle they believe it unequivocally is.

"The Trump administration is absurdly claiming that this 'new' policy is not a ban because it permits transgender people to serve in their birth sex — which makes no more sense than saying that 'gay people can marry as long as they marry someone of the opposite sex,'" says Shannon Minter, a civil rights attorney and legal director of the National Center for Lesbian Rights (NCLR).

In a statement to Bustle, Lt. Col. Carla M. Gleason says transgender people "are allowed to serve openly in the military as long as they are willing and able to meet the standards of their biological sex. Individuals who have undergone medical transition treatment for gender dysphoria, however, are disqualified from military service."

Trans folks who are already enlisted and who are out, and/or actively undergoing hormonal therapy, and/or gender reassignment surgery, would be grandfathered in for the duration of their service, according to a BuzzFeed analysis of the memo. However, after April 12, recruits will be required to adhere to military requirements for the sex they were assigned at birth and will not be allowed to receive hormone treatment or undergo gender reassignment surgery. They may technically identify as trans, but under this new policy, they will not be allowed to pursue a life that is concurrent with their gender identity.

Waivers to the policy will be available on a case-by-case basis, according to the Department of Defense (DoD) website. But this policy would broadly require, for example, a transgender woman to dress for and meet the physical requirements set for men, regardless of whether they identify as transgender or if they have been formally diagnosed with gender dysphoria.

"Being transgender means that a person lives or wishes to live in accord with their gender identity, not their birth sex," Minter says. "This policy effectively forces transgender service members into conversion therapy as a condition of service."

Transgender people have been allowed to serve openly in the military since 2016, when the Obama administration lifted a rule that barred them from enlisting. But President Donald Trump abruptly announced on Twitter in July 2017 that he was reinstating the transgender military ban. According to reports from the time, many military leaders were taken aback by what was apparently an unplanned announcement.

And that announcement, in particular, is the main reason that advocates who spoke to Bustle say that this new transgender policy is not new so much as another way to implement what Trump had already announced.

"What was released last night are the instructions for carrying out the same ban they’ve proposed since 2017," Gillian Branstetter, media relations manager for the National Center for Transgender Equality, tells Bustle.

After Trump's unceremonious 2017 announcement, four separate lawsuits — and then four separate injunctions — were filed against the ban, per The Hill. Last week, the last of those four injunctions was formally lifted, effectively paving the way for a new policy to be released.

"This ban is the same ban that President Trump ordered the military to adopt," Minter says. "It prevents transgender people from enlisting, and it requires discharge of those who are already serving unless they hide and suppress their identity."

The only change, Minter explains, is that under this rule, transgender people who are already enlisted will be allowed to serve the rest of their terms. "But once those individuals serve out their terms," he adds, "there will be no more openly transgender people in the military, if the government is permitted to enforce this new ban."