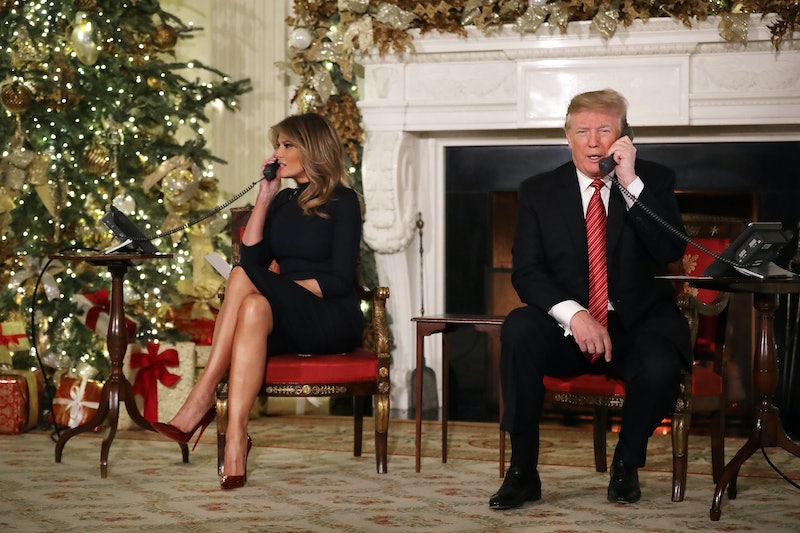 This Christmas Eve, President Donald Trump made perhaps the biggest holiday faux pas of them all — he questioned a child's belief in Santa. Indeed, while fielding a few calls from children seeking Saint Nick's whereabouts from NORAD's Santa Tracker, Trump asked if one child still believed in Santa.

"Hello, is this Coleman? Merry Christmas. How are you?" ABC News reported the president asked. "Are you still a believer in Santa? Because at 7, it's marginal, right?"

Both the president and First Lady Melania Trump were, as tradition dictates, assisting the North American Aerospace Defense Command (NORAD) in taking phone calls from children eager to learn where Santa and his reindeer were flying next. NORAD has tracked Santa Claus' gift-laden Christmas Eve journey around the globe for more than 60 years, offering curious children live updates on Santa's exact location online or via emails and phone calls.

Reporters weren't able to hear how 7-year-old Coleman responded to the president's question, so it's unclear if the child was indeed already questioning the realness of Old Saint Nick. But according to CNN, Trump didn't question every child's faith in Santa. In other calls he helped field, the president appeared to simply assume a belief in Santa Claus, asking things like, "What's Santa going to get you for Christmas?"

To some Trump critics, the president had made a grievous error in questioning a child's belief in Santa when they'd dialed a hotline phone number specifically to learn the jolly man's whereabouts. "If you're 7, yes, Santa Claus exists and loves you," former US Attorney for the Southern District of New York Preet Bharara tweeted. "And he's on his way."

"It's just too freaking fantastic that Trump spent his Christmas Eve calling seven year olds and telling them believing in Santa at their age is 'marginal,'" Sen. Chris Murphy tweeted.

But according to The New York Times, Trump may be spot on in assuming that 7-year-olds have a somewhat shaky belief in Santa Claus. Several studies rounded up by the paper concluded that a majority of children stop believing in Santa Claus between the ages of 5 and 8.

While NORAD has been tracking Santa Claus' whereabouts for children on Christmas Eve for going on 63 years, the organization didn't initially intend to ever use its resources and technology to track Santa. Rather, the NORAD Tracks Santa program was born after a Sears newspaper ad encouraging kids to call Santa direct listed the wrong phone number in 1955.

When children began calling in to the NORAD Operations Center in Colorado Springs, Colorado, it was Colonel Harry Shoup who ultimately made the decision to have NORAD operators pretend to be Santa Claus for every child that called in that night. The tradition continued and now military personnel and some 1,500 volunteers man the NORAD Tracks Santa program every Christmas Eve.

"Helping children across the country track #Santa is becoming one of my favorite traditions!" Melania wrote Monday in a tweet featuring a photos of her and Trump fielding calls from the White House.

CORRECTION: A previous headline mistook the gender of the child whose belief in Santa Trump questioned. It has been updated.