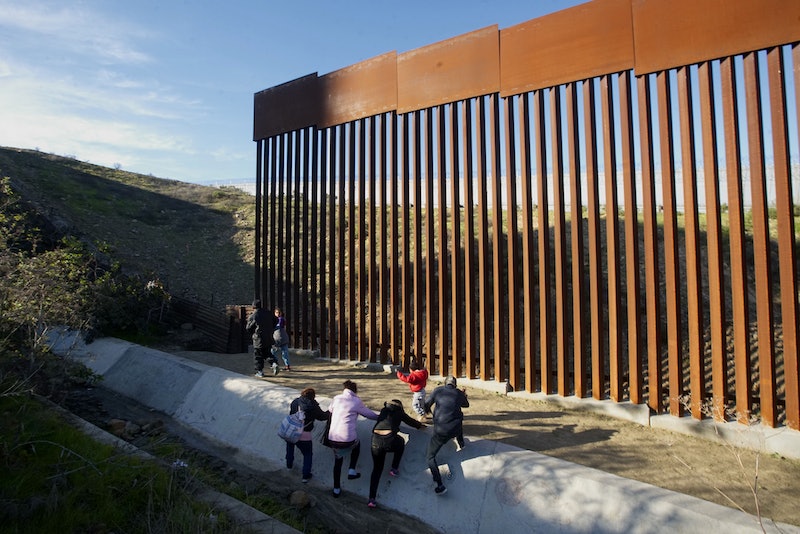 The Trump administration has implemented its latest change to the way the government processes migrants entering the country along the southern border. On Tuesday, the new U.S. asylum policy to return migrants to Mexico took effect when one man was sent back to Tijuana from San Diego, according to CNN. He will be allowed back into the United States only for court dates pertaining to his case under a new policy that migrant advocates say is illegal and plan to challenge in court. Bustle has reached out to the Department of Homeland Security (DHS) for comment on the new policy.

The Washington Post reports that Carlos Gómez Perdomo, originally from Honduras, was stunned when he winded up back in Mexico after spending months on a waitlist to enter the United States at a port of entry. After being sent back, he was quickly surrounded by journalists and photographers before Mexican immigration officials intervened and whisked him away.

"I said to myself, 'I don’t know what’s happening, and I don’t know what will happen in this case,'" Gómez Perdomo, 55, told The Post. He had been waiting to enter the U.S. since November. "After I have spent so much time battling, all the time I’ve spent outside my country, to come to this place with a goal and to lose. I have not advanced at all. Instead I seem to have gone backward."

Homeland Security Secretary Kirstjen Nielsen was at the San Ysidro port of entry on Tuesday to oversee the implementation of the new policy, dubbed "Migrant Protection Protocols" by DHS. Nielsen said in a statement that the new policy will allow "a huge step forward in bringing order to chaotic migration flows, restoring the rule of law and the integrity of the United States immigration system."

She added that DHS will focus resources on "providing relief to individuals fleeing persecution while at the same time holding those accountable who make false asylum claims."

Migrant advocates say that the policy leaves migrants like Gómez Perdomo at risk of violence in Mexico. They've also warned that the humanitarian crisis will worsen at the border, shifting the problem to overwhelmed Mexican border towns — some of the most violent in all of Mexico. "This is literally sentencing people to die," Nicole Ramos, an attorney for legal aid office Al Otro Lado that works with asylum seekers in Tijuana, told The Post.

Mexico's government is also being criticized for going along with the Trump administration's plan. "The Mexican government is accomplice to this violation when it agrees to accept asylum seekers who fled their countries through Mexico to seek refuge in the US," migrant advocacy group Pueblo Sin Fronteras said in statement provided to CNN.

The U.S. cannot send back anyone without Mexican citizenship to the country without Mexico's approval, Tonatiuh Guillén, head of Mexico’s national immigration authority, told The Guardian. "The U.S. can’t just dump people into Mexico – they have to knock," he told the paper.

Mexico has said it will only take back migrants from El Salvador, Guatemala, and Honduras who are between the ages of 18 and 60. It will also only accept asylum-seekers in Tijuana — not elsewhere along the border. Mexicans whose asylum claims are deemed valid by U.S. officials will not be returned because that is the country they're arguing cannot protect them from violence or persecution.

Roberto Velasco Alvarez, the Mexican Foreign Affairs Secretariat spokesperson, wrote an op-ed in The Washington Post on Sunday defending its migration policies and calling the Trump policy "unilateral" — while also acknowledging it would take coordination. He said Mexico would not take back any migrants if "his or her life would be threatened." Velasco Alvarez continued, "Mexico expects that asylum seekers with a credible fear of such threats will not be sent to our country."

Migrant advocates have said they plan to gather evidence in the following days before suing to stop the Migrant Protection Protocols policy. Exactly who is sent back could influence the legal argument.