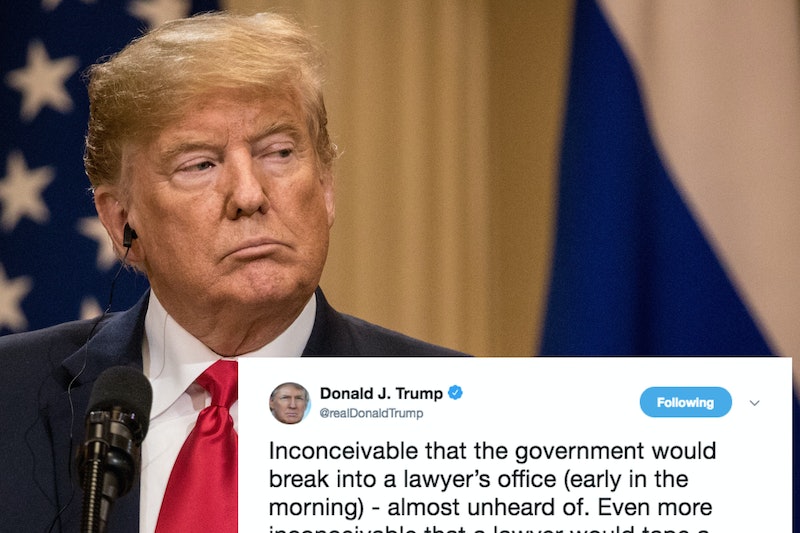 On Friday, The New York Times reported that President Donald Trump's former personal attorney, Michael Cohen, secretly recorded the conversation they had prior to the election about paying off Playboy model Karen McDougal, who alleged that she had an affair with Trump. And now the FBI is in possession of the recording, according to CNN. On Saturday morning around 5 a.m., Trump responded to the Michael Cohen tapes with his own passionate accusation.

The FBI reportedly discovered the recordings of Cohen's meetings with Trump during raids on Cohen's property and office in April, according to the BBC — raids that took place as part of a criminal investigation of Cohen by the U.S. attorney's office for the Southern District of New York, CNN reported. Cohen is under investigation for alleged bank and tax fraud and for possibly violating an election law, according to the BBC. Cohen has not been charged with any crime, and his lawyer, Lanny Davis, told CNN that the tapes will not hurt Cohen.

Former New York Mayor Rudy Giuliani told CNN that most of the tapes are uninteresting, but an anonymous source disputed that claim, telling CNN, "the conversation is not as Giuliani described and is not good for the President." The source refused to go into detail.

Trump's legal team has reportedly reviewed the McDougal tape and maintains that the president didn't break any law, according to the BBC. Early Saturday morning, Trump defended his innocence further, writing on Twitter: "Inconceivable that the government would break into a lawyer’s office (early in the morning) - almost unheard of. Even more inconceivable that a lawyer would tape a client - totally unheard of & perhaps illegal. The good news is that your favorite President did nothing wrong!"

In his tweet, Trump not only called out the FBI, but he also targeted Cohen for taping their meetings. But in New York, the state where Cohen and Trump reportedly met, only one party must be aware that a conversation is being recorded, according to Business Insider. Additionally, the New York Bar Association doesn't ban secretly recording conversations with clients, though it does deem them unethical, Business Insider reported.

The tapes may help the FBI solve one part of their investigation — namely, the question of whether Cohen violated an election law by secretly paying women who alleged affairs with Trump in an effort to cover up the allegations and assist Trump in the 2016 election, the BBC reported.

Cohen has previously admitted to paying adult film actress Stormy Daniels $130,000 eleven days before the 2016 presidential election to prevent her from speaking publicly about an alleged affair with Trump, according to Business Insider. He said he was never reimbursed after paying her with his own personal funds, and Trump claimed he wasn't aware of the payment. But in May, Trump reversed course, saying he actually did reimburse Cohen for the payment to Daniels, the BBC reported. Still, Trump denies the affair ever happened.

If the payment was made to cover an affair, though, it could be considered an "in-kind contribution" to Trump's campaign. And the amount is reportedly $126,500 "above what he's allowed to give," Trevor Potter, a former chairman of the Federal Election Commission, told Business Insider.

Now, the McDougal tape adds to questions regarding whether Cohen helped cover up Trump's alleged affairs. McDougal signed a contract with American Media Inc., the company that owns the National Enquirer, that gave the publication exclusive rights to McDougal's story of her affair with Trump, CNN reported. But the Enquirer never published the story, and the contract barred McDougal from speaking with other publications prior to the 2016 election, Business Insider reported.

On Cohen's tape, recorded two months prior to the election, Cohen and Trump reportedly discuss buying the rights to the AMI contract, and that's where things get tricky. Giuliani told CNN that the contract was a "nondisclosure agreement," and that "nothing in that conversation" on the tape "suggests it was a campaign contribution. There's no discussion about harm to the campaign." And Giuliani told CNN Cohen and Trump didn't end up buying the contract from AMI. Still, the BBC reported that Trump previously denied any knowledge of a payment for McDougal's story, and the tape at least provides evidence that he was not only aware of the contract, but he also discussed purchasing it with Cohen. The White House didn't immediately respond to Bustle's request for comment.

It's unclear whether the deal did go through, and that could be what matters most in regards to the election law. The FBI has reportedly requested the National Enquirer's records of the alleged payment for McDougal's contract, according to the BBC.