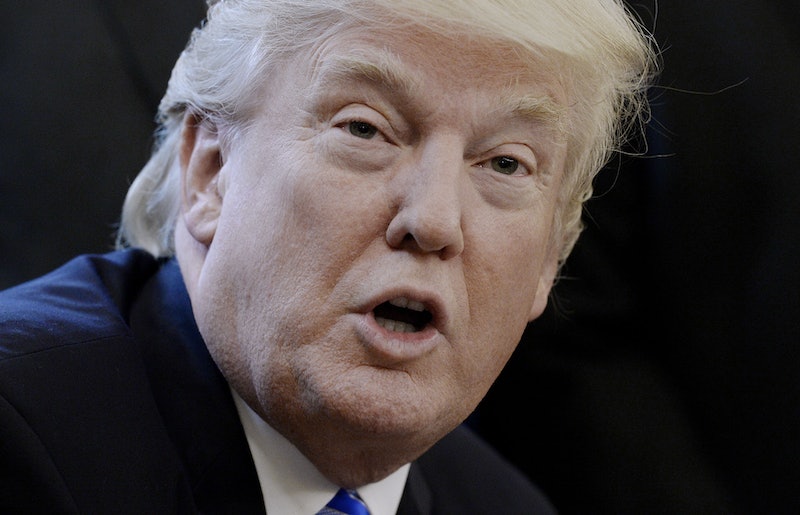 After seven years of promising to repeal and replace Obamacare, along with Donald Trump's campaign claim he'd repeal Obamacare "on Day 1" in office, the Republican attempt to undo former President Obama's Affordable Care Act fell apart before it even came up for a vote in the House of Representatives.

The new president laid blame, not on the Republicans who couldn't stick together as a caucus to pass the bill, but on the opposite party. According to New York Times reporter Maggie Haberman, Trump blamed the Democrats in the House who didn't join in with a bill that they were largely shut out of discussing from the beginning, to the point where they were blocked from even seeing it during negotiations. According to Haberman, the president is nevertheless happy about "having this in the rearview mirror."

Trump's focus on the Democrats was reiterated by Washington Post reporter Robert Costa. According to Costa, Trump now hopes to find a new way of compromising with Democrats on a larger deal, expecting that Obamacare will "implode" soon, despite analysis from the Congressional Budget Office suggesting that won't happen. What that deal could entail is still unclear, though with Trump's previous support for single-payer health care, it's possible he could seek a more expansive health coverage.

During his press conference, House Speaker Paul Ryan said that for the time being, House Republicans and the Trump administration hoped to move on to other things — he, like other Republicans, mentioned tax reform as a top priority going forward. But that goal could certainly have its own issues — tax issues are notoriously complicated, and Republicans are split on the prospect of a Border Adjustment Tax that would apply to imported goods.

In a later meeting with reporters in the Oval Office, the president reiterated his attempt to blame the failure on Democrats, including Senate Minority Leader Chuck Schumer, who wasn't even in the same chamber as the one that considered and pulled away from voting on the bill.

When asked about this at a press conference, House Minority Leader Nancy Pelosi laughed and said, "Wonderful! That's good news!" Democrats were eager to continue taking ownership of President Obama's signature health care legislation, and pointed to the millions of people who have gotten access to health care because of it.

Trump expressed surprise on how badly the bill did in the House. He told reporters that it may have been as many as 15 votes from the 215 it needed to pass — a sizable margin for a party that outnumbers its opposition in the House 237 to 193. He also expressed surprise that the House Freedom Caucus — the arch-conservative faction who often call themselves the "Hell No Caucus," previously forced former Speaker John Boehner to resign, and were instrumental in pushing the bill to the right and then not voting for it anyway — were so obstinate, suggesting he hasn't been paying much attention to politics in the past few years (and hasn't talked to his own budget director, a former HFC member).

At one point while speaking in the office, the president also said he'd "never said repeal it and replace it in 64 days," despite having previously said he'd do it even faster than that.

It's hard to see quite how bad this setback will be for Trump and the Republicans. Many other presidents, including Richard Nixon, Jimmy Carter, and Bill Clinton, failed when they tried to reform health care, and the three presidents diverged widely in how successful their presidencies ended up.

The president seems optimistic, but this week he not only saw the massive failure of the health care bill, but the FBI director also revealed that the president is under investigation and called him a liar in so many words. Trump is certainly off from his "so much winning" promise.