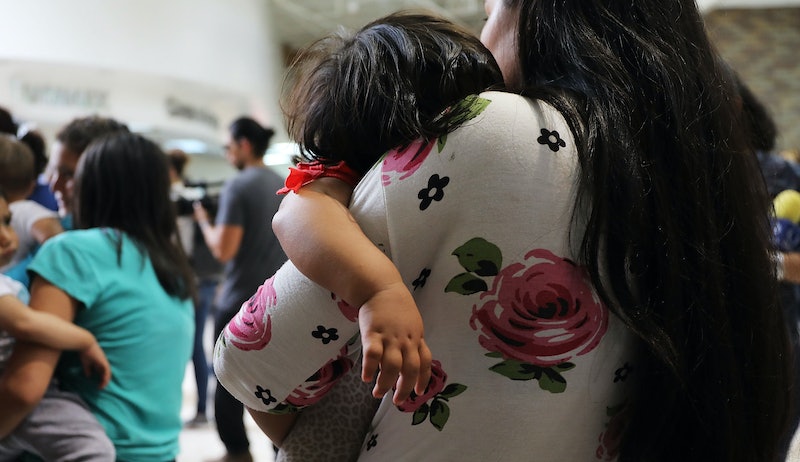 In this op-ed, Aditi Juneja, communications organizer for Protect Democracy, examines Trump’s argument that “women and children are the biggest victims” of our immigration system — and asks why he’s not doing anything to fix that.

During Tuesday’s presidential address on the situation at the border, President Trump said “women and children are the biggest victims by far of our broken system.” And he’s right. But what Trump didn’t say was that as president, he has not only the power, but also the responsibility to work to fix the unique challenges that immigrant women and children face. Sadly, the concern he expressed in his address was nothing more than a rhetorical shield intended to conceal his own inaction.

During the address, Trump stated that one in three women are sexually assaulted on the journey from Mexico, which is true, according to Doctors Without Borders. This is a travesty. However, the president’s purported concern struck me as disingenuous given that nearly two dozen women have accused him of sexual misconduct — all of which he denies. Plus, sexual assault does not only happen to women making the journey to the United States. Between 2010 and 2017, there were over a thousand complaints of sexual assault in Immigration and Customs Enforcement (ICE) custody, The Intercept reported, with more than half of the complaints identifying an officer or private detention contractor as the alleged perpetrator.

Later in his speech, Trump discussed the importance of securing our borders to prevent crime. He told the stories of two women, one of whom was raped, who were killed by undocumented immigrants. He said all of this while conveniently ignoring the fact that, according to studies, immigrants in the United States have a lower crime rate than non-immigrants.

This is a continuation of the long history in the United States of racist depictions of people of color as dangerous. These depictions serve to spark fear of the "other" and to further disempower already marginalized communities. The first moving motion picture to be shown in the White House reportedly was the Klu Klux Klan movie Birth of a Nation, which depicted Black men engaging in sexually predatory behavior. Accusations of rape led to lynching in black communities. By singling out the stories of women killed by undocumented immigrants, Trump perpetuates the long and ugly history of justifying bigotry against marginalized communities under the guise of protecting women and children.

To be sure, sexual assault was and continues to be a real problem in our society — and especially among the most vulnerable, which includes both those who are on their way to the United States and those in the U.S. custody. But none of Trump’s actions so far demonstrate that he’s interested in working to address this problem of sexual assault. He has taken no actions to protect immigrant women and children from the abuses they face, either.

These changes harm the very same group of people that Trump described as the primary victims of our broken immigration system.

In fact, the Trump administration has made changes to our existing immigration system that disproportionately harm women and children. Former Attorney General Jeff Sessions made the decision to remove domestic violence as a criteria for seeking asylum. And the Trump administration’s reduction of the number of refugees resettled in the United States disproportionately impacts women and children, who represented 72 percent of refugees in 2016, according to the Council on Foreign Relations. These changes harm the very same group of people that Trump described as the primary victims of our broken immigration system.

While some of these challenges predate Trump, if he was truly concerned about women and children who are trying to immigrate to the United States, he could work to create new standards and provide enhanced funding to prevent abuses of those in ICE and Customs and Border Protection (CBP) custody. Protect Democracy, the organization I work for, called for this exact move in our legislative Roadmap for Renewal. We also called for the creation of an independent oversight mechanism to monitor and respond to abuses of those confronted and detained by ICE or CBP.

At the very least, Trump could stop enforcing policies that disproportionately affect women and children. In September 2018, families and children made up half of the people who were apprehended by Border Patrol agents while entering the country, Vox reported. The Trump administration also infamously separated children from their parents at the border, leading to a nationwide protest under the banner “Families Belong Together.” Trump ultimately signed an executive order to end the family separation policy. Some have suggested that family separation served as a deterrent to those seeking asylum, but there is no indication that it was effective in keeping anyone from coming to the United States for asylum. At Protect Democracy we’ve called for a blue ribbon commission to recommend ways to fix our immigration system that don’t involve these types of immigration enforcement policies.

As of today, President Trump has not taken any actions to address the reported abuse of those in federal custody, nor has he addressed how to protect women and children from the broken system he acknowledges. The only solution he can seem to imagine is a wall — which would not do anything to address the challenges they face.