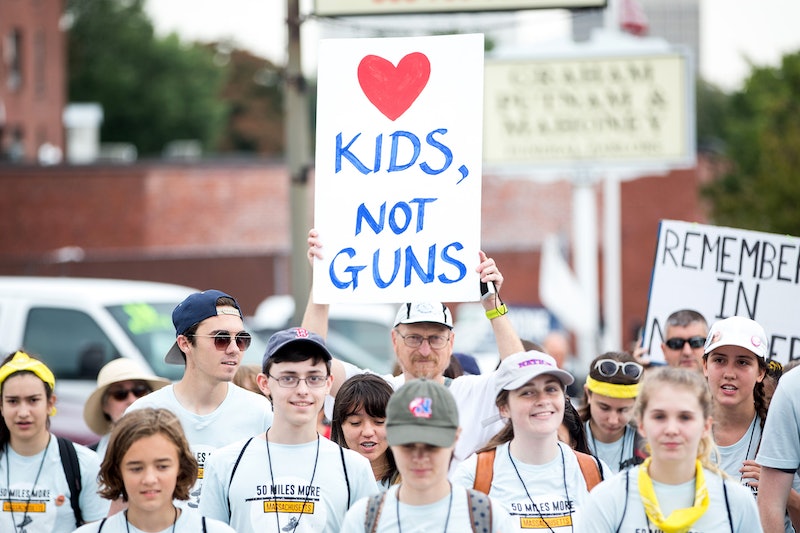 After the Parkland school shooting in February, President Trump announced the formation of a panel to study possible ways to reduce violence in schools. Ten months later, Trump's school safety commission has made its recommendations — and although the report is 177 pages long, it only briefly mentions gun control as a possible way of deterring school shootings.

The commission does endorse Extreme Risk Protection Order laws, which enable family members and law enforcement to temporarily stop individuals deemed at risk of harming themselves or others from possessing or buying firearms. It also devotes two and a half pages to arguing against minimum age requirements for firearm purchases, arguing that they won't reduce school gun violence.

Other than that, the report doesn't mention gun control. Moreover, it argues that the job of preventing violence in schools falls not with the federal government but with school districts, school administrations, and state and local governments.

"The federal government can play a role in enhancing safety in schools. However, state legislators should work with local school leaders, teachers, parents, and students themselves to address their own unique challenges and develop their own specific solutions," the report says. "What may work in one community may or may not be the right approach in another. Each local problem needs local solutions."

The commission's report received heavy criticism on Tuesday for suggesting, among other recommendations, that the Trump administration roll back an Obama-era initiative aimed at reducing racial discrimination at schools. Various studies have shown that school officials discipline black students disproportionately more than their white peers, and the 2014 Rethink Discipline guidance sought to rectify this. However, the commission's authors say they are "deeply troubled" by that guidance, and argue that "disparities in discipline that fall along racial lines may be due to societal factors other than race."

The "comprehensive approach" that Trump's commission proposes does include many recommendations, several of which center on mental health. The administration proposes that schools develop ways of "identifying youth at risk for mental illness and connecting them with needed treatment, services, and support," and encourages states to pass "model" legislation to compel treatment for those with mental illness.

The administration also has several suggestions for how schools can fortify their campuses to thwart potential shooters, including replacing wooden doors with metal doors, limiting the number of entry points to a building and installing bulletproof windows and surveillance systems. The commission does mention metal detectors as a possible means of defense, but says that they're "labor-intensive, time consuming, and costly" to install, and cites a study that casts doubt on metal detectors' efficacy in reducing school violence.

After the Parkland shooting, some gun rights activists suggested stationing armed security officers in schools, or even arming teachers. This was a highly controversial proposal, and remained so after two armed teachers, on the same day, accidentally fired their guns at school, in one case injuring a student.

The commission's report mentions the possibility of armed campus guards, but doesn't take a stance one way or the other on it. Rather, the commission says that states, districts and local schools should make decisions "based on the unique circumstances of each school." The report does propose that schools make efforts to place veterans and retired law enforcement officers in teaching positions, and suggests that they could be helpful during school shootings.

The commission concludes that its recommendations "do not and cannot supplant the role families have in our culture and in the lives of children."