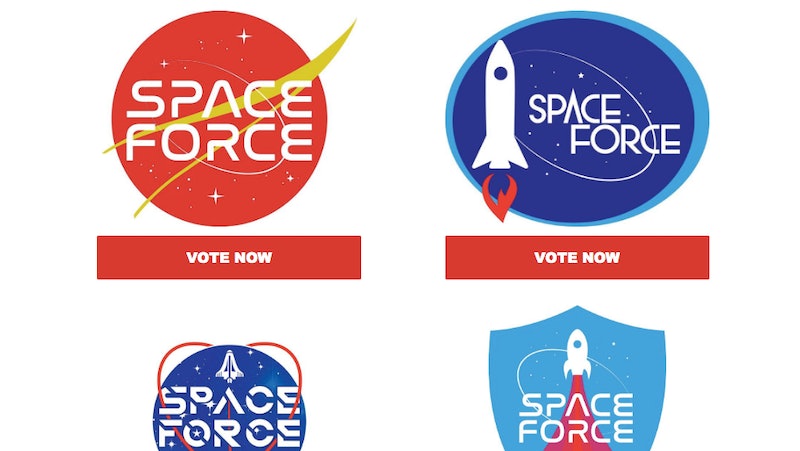 Have you ever wondered what awaits us human beings on Mars, the mysterious volcanic planet with scorched craters? In an apparent spin on that notion, the options offered up by Donald Trump's campaign's for a "Space Force" logo in an email to supporters on Thursday included one of them declaring "Mars Awaits." The campaign requested that supporters vote for their favorite logo, which according to the email, it will then use for a new line of campaign merchandise.

Addressing the reader as "friend," the email from Trump's campaign said, "President Trump wants a SPACE FORCE — a groundbreaking endeavor for the future of America and the final frontier."

"As a way to celebrate President Trump's huge announcement," the email went on to say, "our campaign will be selling a new line of gear. But first we have to make a final decision on the design we will use to commemorate President Trump's new Space Force — and he wants YOU to have a say."

The creation of a "Space Force" has been on Trump's mind for a while now. In April 2017, he spoke to International Space Station astronauts and mused that NASA should send a mission team to Mars "at worst, during my second term." Then the president floated the idea of a "Space Force" earlier this year. In March, Trump said, "Space is a warfighting domain, just like the land, air, and sea. We may even have a Space Force, develop another one, Space Force. We have the Air Force, we'll have the Space Force."

In June, Trump reportedly directed the Pentagon to "immediately begin the process" of developing and funding a sixth military branch for space.

On Thursday morning, Vice President Mike Pence laid out how a "Space Force" would be created. The vice president said, "Just as we’ve done in ages past, the United States will meet the emerging threats on this new battlefield. The time has come to establish the United States Space Force."

Still, in spite of backing from Pence, the president has faced backlash for his plan, too. Back when Trump announced the idea of a Space Force, high-ranking military officials opposed the proposal, including Defense Secretary Jim Mattis. At the time, Mattis wrote a letter to Rep. Mike Turner, who was spearheading a campaigning against the Space Force, and said, "At a time when we are trying to integrate the Department's joint warfighting functions, I do not wish to add a separate service that would likely present a narrower and even parochial approach to space operations."

His campaign may have intended it to appear as a serious and formidable set of logos but the released logos have received mixed reactions on Twitter. Some have even taken the opportunity to create memes about the "Mars Awaits" logo, specifically. Like this one right here.

Others simply wanted to understand what "Mars Awaits" and other logo designs mean. Whether they're officially used or just discard, it's clear that Trump campaign's logos have sparked quite the conversation online.