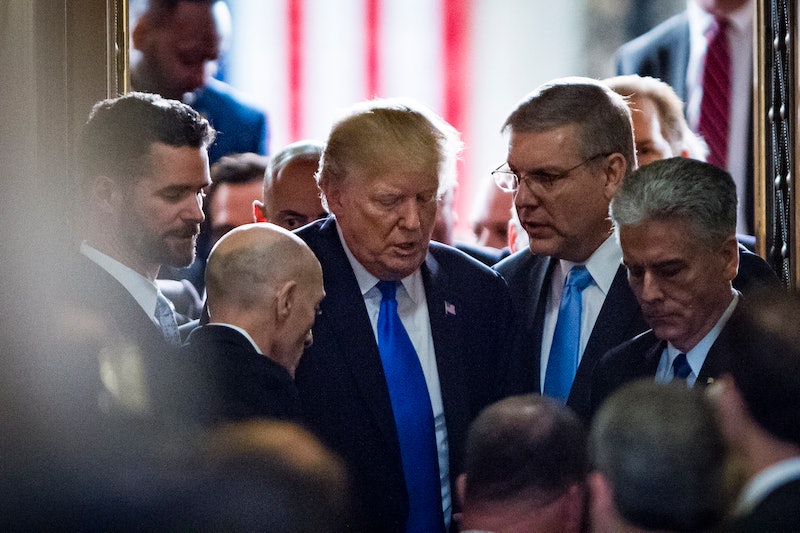 Tuesday evening marked President Donald Trump's first-ever State of the Union (SOTU) address, in which the president addressed a variety of issues affecting the country. Notably, Trump didn't say "women" once in his SOTU speech — and his words were generally devoid of support for women's issues.

Trump's speech on Tuesday came at a time when women's issues are at the forefront of national and global discussion. For the past few months, the #MeToo movement has shed light on the pervasive problem of sexual misconduct in the workplace and beyond. The movement has helped empower many women to speak out against those who have engaged in inappropriate behavior toward them. Women's courage in speaking out has resulted in many men being removed from their professional posts for engaging in sexual misconduct.

Moreover, partly in response to Trump's presidency, women have become highly politically active in the last year. Indeed, the day after Trump's presidency, women and men around the world engaged in women's marches to advocate for women's rights — and often to protest against Trump's anti-women rhetoric and actions. Similar marches took place across the country this year on Jan 20.

Trump failed to even remotely address women's issues and concerns about his presidency's impact on women during his State of the Union address — a seemingly significant oversight, considering the national attention garnered by the women's movement in the past year. The speech could have provided an opportunity for Trump to address women's concerns, show solidarity with the movement, and commit to policy changes that will help women — and commit to avoiding those that hamper their rights.

However, this speech did none of that. Trump never even mentioned the word "women" nor did he address women's issues. He only said the word "woman" one time — and that was merely to refer to to a woman when he was telling a story about the opioid crisis.

Trump's speech was a disservice to women and, unfortunately, was simply illustrative of the significant shortcomings of his presidency when it comes to women's issues. Indeed, he has already seemingly significantly rolled back women's rights.

For example, in January, Trump reinstated and expanded the global gag rule, limiting women's access to abortion and general health care around the world. In August, he halted the Obama-era equal pay rule that required large companies to report employee salaries by race and gender, putting a wrench into the already challenging fight for equal pay. In October, the president rescinded the Obamacare employer birth control coverage mandate, allowing employers to claim a religious or moral exemption to providing birth control coverage for employees — and potentially making it exceedingly difficult for women to afford birth control.

These examples constitute just a few of the many ways Trump's presidency has harmed women. Trump could have used his State of the Union address to seek to remedy this harm, addressing the concerns that many have expressed over how his policies have negatively affected women — and committing to changes that seek to counter some of these negative effects. He also could have at least acknowledged the significant national and global traction around women's rights, particularly the #MeToo movement.

Admittedly, it is uncertain whether Trump addressing women's issues during his speech would have appeared genuine, considering his history of anti-women rhetoric and the multiple allegations of sexual misconduct against him (Trump has repeatedly denied these allegations).

However, not addressing women's issues at all during the State of Union — especially at a point in time where so many women in the union feel disenfranchised — seems like a significant misstep and an affront to women (and men) across the nation. As the National Women's Law Center described on Twitter, Trump's State of the Union sent the message to women that they know where they "... stand in Trump's vision of our union" — and they do not appear to feature prominently.