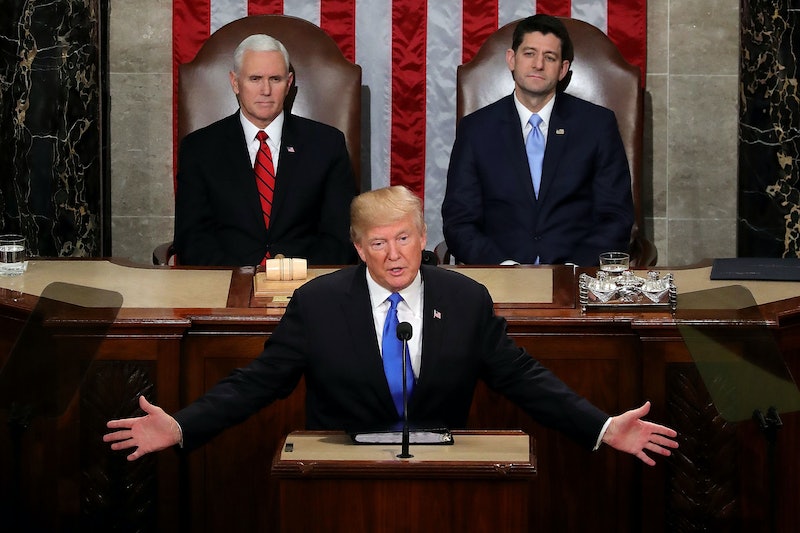 After the longest shutdown in government history, President Donald Trump will finally give his second State of the Union address to Congress on Tuesday. There's a lot that differs about the two and their approach to the State of the Union, and their guests are no exception. Trump's State of the Union guests compared to Obama's show the stark differences in the men's political agendas.

During his final State of the Union address in 2016, Obama invited 23 guests, including advocates for the addicted, criminal justice reform, and veterans. He also invited the Microsoft CEO, a Syrian refugee, the first female Army Reserve officer to graduate from the Ranger School, a DREAMer, and Jim Obergefell, whose name is on the landmark gay marriage ruling, among others. The Greenwood County, South Carolina council member who created the unofficial slogan of the two Obama campaigns ("Fired up! Ready to go!') was also invited.

Another Obama guest that made headlines was the seat left empty in honor of gun violence victims. "We leave one seat empty in the First Lady’s State of the Union Guest Box for the victims of gun violence who no longer have a voice – because they need the rest of us to speak for them. To tell their stories. To honor their memory," according to a 2016 release from the White House. "To remind every single one of our representatives that it’s their responsibility to do something about this."

Trump — who is coming off the longest shutdown in history forced by his need for funding for a southern border wall — told The Daily Caller on Wednesday that he plans to bring "border-related" guests. "I will say that some of them will be border-related, some of them will be people who have suffered very badly because we didn’t do what we should've done in a very dangerous part of our country, and so that’s going to be a part of it, absolutely," Trump told the conservative website.

In 2015, Obama and First Lady Michelle Obama hosted nearly two dozen guests in the First Lady's box, including Alan Gross, who was freed from a Cuban prison after about five years imprisonment, according to NPR, as well as climate scientist Nicole Hernandez Hammer; Army Staff Sgt. Jason Gibson, who was wounded while serving in Afghanistan; and Los Angeles Police Capt. Phillip C. Tingirides, who headed a program that fostered cooperation between the police and Watts residents, among other invitees.

In 2014, the Obamas hosted NBA player Jason Collins, who came out as gay in April 2013, two survivors of the Boston Marathon bombing, a teacher of the year, a DACA recipient, the CEO of General Motors Company, and the first female four-star Admiral in the Navy, among others.

During his first State of the Union address, Trump and First Lady Melania Trump hosted a welder, two parents whose children were killed by MS-13 gang members, the first double amputee Marine to re-enlist, the founder of the flood first responders Cajun Navy, an Immigration and Customs Enforcement agent whose work was said to have led to the arrest of more than 100 gang members, a police officer who adopted a child whose parent struggled with opioid addiction, and the owners of a company who gave larger holiday bonuses because of Trump's tax reform, according to USA Today.

Obama hosted 23 guests at his first State of the Union in 2010, according to The Washington Post. His guests included police officers credited with ending the shooting at Fort Hood, and the Republican mayor of Oklahoma City, who had launched a program to fight obesity in his city (an interest of the first lady), according to the newspaper. In the box with the first lady was also a woman whose family wasn't given health insurance because of their preexisting conditions, and a veteran who served six tours in the Middle East.

While Obama's guests have leaned toward bipartisanship, both his and Trump's guests have been used to highlight their political goals. Time will tell who Trump's "border-related" guests will be this year.