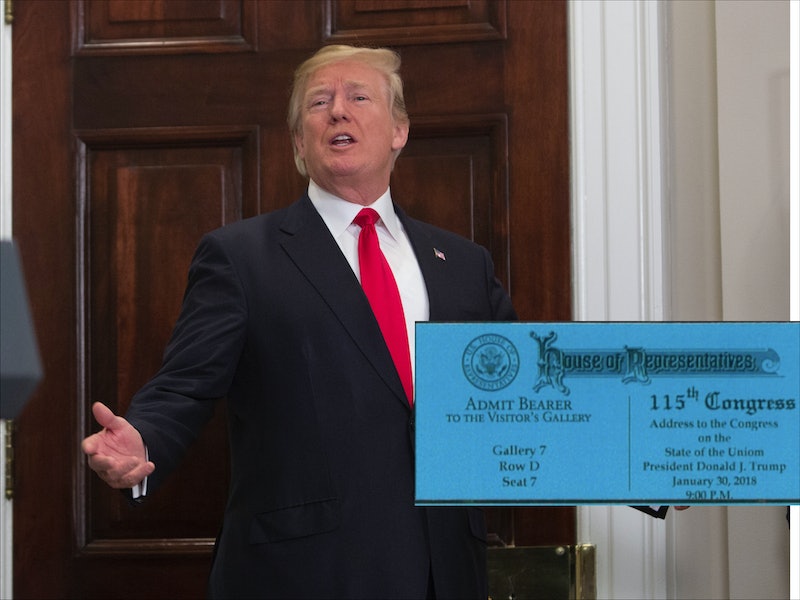 According to a CNN report published on Monday evening, there is a typo on some of Donald Trump's State of the Union tickets. Instead of saying "union," the ticket says, "State of the Uniom" and was published by the Office of the Sergeant at Arms and Doorkeeper. At this moment, it's not known whether the misspelling is plastered on every single ticket published.

A source from the Office of the Sergeant at Arms and Doorkeeper and one familiar with the situation told CNN that the typo was being taken care of as tickets were apparently reprinted and redistributed. One source from the office also told NBC News:

There was a misprint on the ticket. A correction has been made and our office is redistributing the tickets.

But it looks like the damage has been done. At least, online. On social media, the typo was noticed by Arizona Democrat Rep. Raul Grijalva who tweeted a photo of the ticket and said, "Just received my ticket for the State of the Union. Looks like @BetsyDeVosEd was in charge of spell checking... #SOTUniom."

For others like Florida Sen. Marco Rubio, the typo didn't seem like a big deal. On Monday evening, Rubio tweeted an image of typo-containing ticket and said, "Looking forward to tomorrow’s State of the Uniom." Other people had other theories. Mark Fuller, Huffington Post reporter, shared a theory on Twitter and said, "And somewhere in the Capitol, an worker in the print shop cackles with delight over his State of the Uniom handy work. 'Welcome to The Resistance,' he whispers.

Some observers on social media noted that they were not surprised by the misprint and that it "summed up" Donald Trump's administration. One Twitter user said, "The State of the Uniom thing is just so typically in line with the lack of competency this administration shows at every level." Some simply turned to express their frustration through humorous gifs.

This won't be the first time that Trump's administration has tripped over the English language. In a poster for his inauguration in January 2017, Trump's poster said, "No dream is too big, no challenge is to great. Nothing we want for the future is beyond our reach." At first, it's easy to miss the "to" used instead of "too" in the "no challenge is to great" sentence but soon enough, a lot of people ended up noticing the typo.

In January 2017, again, Trump's administration misspelled United Kingdom's Prime Minister's name, Theresa May. In the press release, May's name was misspelled not one or two but three times. Instead of "Theresa May," the name was spelled as "Teresa May" who is, in case you didn't know, an adult entertainment performer.

Last year, Trump tweeted negative commentary on the New York Times and the Washington Post but seemed to have forgotten to double-check for any misspellings. He not only misspelled "the" to "thr," he also turned "has" into "gas."

In another White House press release on Palestine and Israel, the administration misspelled "peace" and turned it to "peach." The line was "promote the possibility of lasting peach." There have been numerous English mistakes that the New York Daily News compiled a list of typos that have taken place under the Trump presidency. Other words that have been misspelled under Trump's administration or by Trump himself include heal ("heel"), The "Human" Society instead of The Humane Society, and "Air Force Once" instead of Air Force One.

Now, it's normal to make mistakes while we write or speak. Language is a tricky thing and sometimes, in our rush, we forget to spell-check before we hit that print or tweet button. But for many who have read Trump's State of the "Uniom" ticket, the typo wasn't just a normal slip in spelling. To them, it encapsulated the present state of the administration.