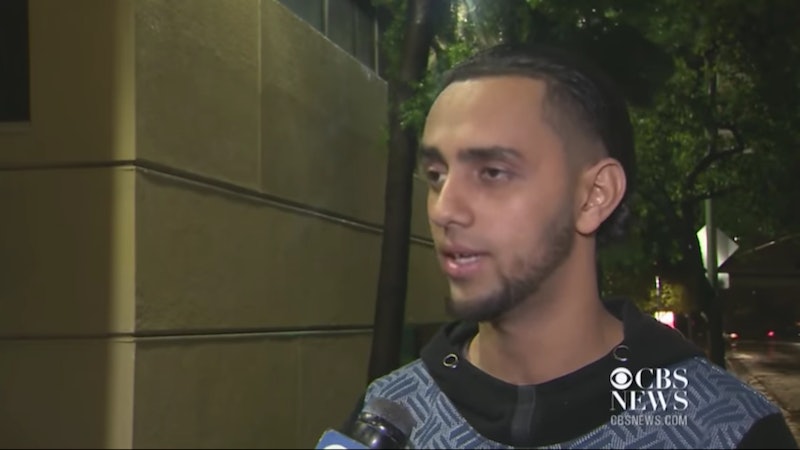 There's still fallout from President Donald Trump's hotly contested travel ban — and this time it involves a dying 2-year-old boy. The family of Abdullah Hassan says the Trump administration's travel ban prevents his Yemeni mom from traveling to California to say goodbye to her son, according to the San Francisco Chronicle. CBS News reports that Hassan's mother, Shaima Swileh, is currently in Egypt while Abdullah remains on life support at UCSF Benioff Children's Hospital Oakland.

According to Chronicle, Abdullah was born in Yemen with a type of hypomyelination. That's a rare brain disease that can include symptoms like trouble breathing, muscle weakness, and difficulty walking, according to the National Organization of Rare Diseases. Hassan's father, Ali Hassan, is an American citizen and decided to bring him to California, where they settled for treatment about five months ago, the Chronicle reports.

"It's separating family–literally separating family from each other," Hassan told KPIX, the CBS affiliate in San Francisco. "Right now, there's no parent supposed to go through what I'm going through–nobody. I'm just doing my best, I do what I can."

The Council on American-Islamic Relations (CAIR) has created a petition in support of Abdullah's family, demanding that the State Department allow Swileh to be reunited with her son before he dies. The group told CBS News that it plans to file letters with the U.S. Embassy in Cairo and the State Department.

KPIX reported that Hassan brought Abdullah to California for treatment in October, which was the last time his mother saw him. "It's horrible right now to be honest. I'm going through it and my wife is going through it," Hassan said. "My son is in critical condition right now. He's really, really unhealthy."

Hassan told CBS News the past few months have been incredibly difficult on all members of his family. "She starts crying and crying every single day," Hassan said of his wife. "She wants to be next to her son. Right now, he can't breathe, and his eyes are literally shutting down for almost two weeks already, and all you can see is the life support giving him air, that's it."

Abdullah was born in the midst of a horrific civil war in Yemen. United Nations Secretary-General António Guterres said in April that "Yemen is the world’s worst humanitarian crisis." Last month, one aid organization said it was "a conservative estimate" that 85,000 children under the age of 5 had starved to death there due to famine.

It's in this context that Hassan and Swileh sought treatment in the United States for Abdullah. According to the Chronicle, around August 2017 Hassan and Swileh met in Cairo to get a U.S. passport for Abdullah and start the process of getting a visa for Swileh. They obtained the passport, but waited months for the visa. Eventually, the U.S. embassy sent a letter saying Swileh's application had been denied due to the travel ban, the newspaper reported.

"I wanted to bring them both together, but since I couldn't bring my wife — it’s hard for me to see my son suffering in Cairo," Hassan told the Chronicle. "So I had to do what I had to do."