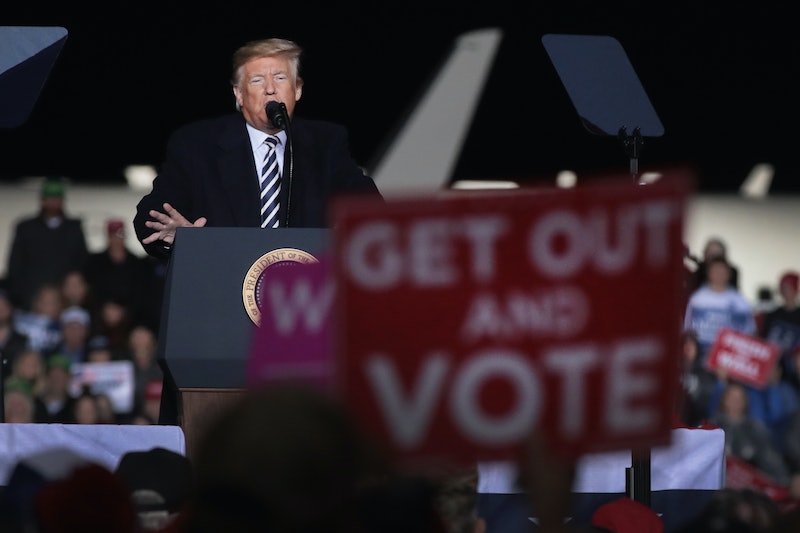 Since last week, as midterm election results have been rolling in, the president and other GOP members like Marco Rubio and Rick Scott have accused Democrats of attempting voter fraud. The allegations so far have centered on new ballots being "found," or "forged," a "lack of transparency," and Democratic lawyers attempting to swing an election in their favor. But on Wednesday the president went one step further, accusing some of voting twice by changing their clothes in between. As you might expect, Trump's voter fraud claim about Democrats playing disguise is currently being raked across the coals on Twitter.

"The Republicans don’t win and that’s because of potentially illegal votes," Trump said during an interview with The Daily Caller, a conservative news site co-founded by Tucker Carlson. "When people get in line that have absolutely no right to vote and they go around in circles. Sometimes they go to their car, put on a different hat, put on a different shirt, come in and vote again. Nobody takes anything. It’s really a disgrace what’s going on."

Voter fraud in general is not a new rallying cry for Trump. In 2016, he baselessly alleged "millions" of illegal votes cost him the popular majority in the presidential election. At that point, however, he claimed it was undocumented immigrants voting illegally, not anti-Republican voters swapping outfits. There's a lack of evidence behind either claim.

A comprehensive roundup of studies by the Brennan Center for Justice found that the actual rates of voter fraud in America are, practically speaking, nonexistent. In fact, a 2014 study from The Washington Post, found that between 2000 and 2014, in which time more than a billion ballots were cast in general and primary elections, there were only around 30 to 40 cases of plausible voter fraud.

Later in the interview, Trump reiterated his call for strict voter ID laws, saying, "If you buy a box of cereal — you have a voter ID. They try to shame everybody by calling them racist, or calling them something, anything they can think of, when you say you want voter ID. But voter ID is a very important thing."

Trump first floated the idea of needing an ID to shop at a grocery store in August, baffling his Twitter audience and late-night hosts alike. This instance was no different, again leading some to question whether the president has ever bought his own groceries, since common knowledge dictates that you almost never need an ID to buy cereal.

Voter ID laws are meant to target instances of in-person voter fraud, which again, are so rare they have a lower probability of occurring than that of being struck by lightning. According to the National Conference of State Legislatures, 34 states currently have a law in place requiring some form of identification at the polls, and seven have strict photo ID laws. It has been well-documented that they disproportionately disenfranchise people of color, and many courts have already struck down such policies for being discriminatory.