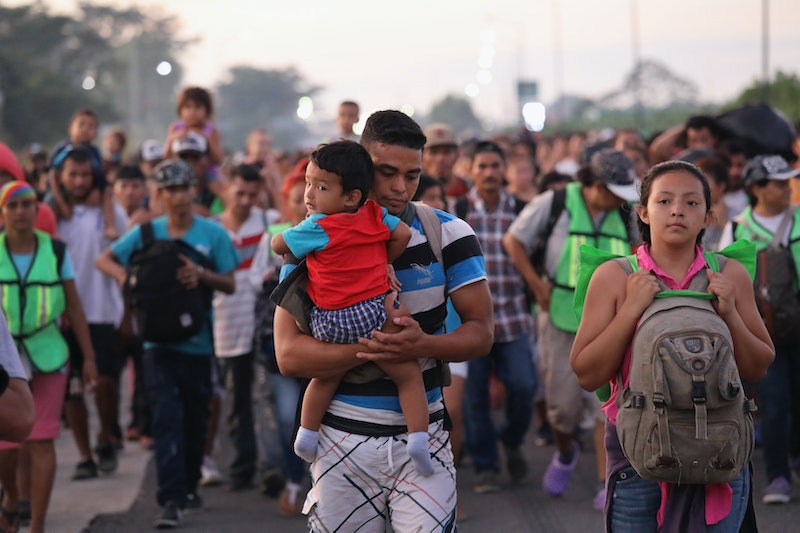 The report stated that employees at the Department of Health and Human Services (HHS) and Department of Homeland Security (DHS) were caught off guard by the administration's now-defunct policy of separating migrant families at the U.S.-Mexico border.

Bustle has contacted the White House for a comment. A spokesperson for DHS, Katie Waldman, told The New York Times that the federal agency followed a court order and brought migrants children back to their parents. "In addition, we have prevented the reunification of children with adults who were not their parents or were unsafe for children," Waldman said.

Based on a review of the Government Accountability Office report, Nixon wrote that HHS employees said they were told "not to prepare for an increase in children separated from their families because homeland security officials claimed that they did not have an official policy of separating parents and children." In July, HHS reported that over 3,000 migrant children were taken away from their parents as a result of the policy, which Trump ended in June.

According to the nonpartisan investigative report, the federal agencies were thrown off when Attorney General Jeff Sessions declared that those who cross the border illegally would be prosecuted. In May, Sessions said, "If you cross this border unlawfully, then we will prosecute you. It's that simple. If you smuggle illegal aliens across our border, then we will prosecute you."

Sessions added at the time, "If you are smuggling a child, then we will prosecute you and that child will be separated from you as required by law. If you don't like that, then don't smuggle children over our border."

It was an announcement that elicited swift condemnation from activists. American Civil Liberties Union's deputy director for immigration rights, Lee Gelernt told NPR, "We don't think the U.S. should be prosecuting asylum seekers, attempting to deter asylum seekers. We certainly don't think they should be prosecuting families with little children so the end result is these little children are sent off by themselves."

Amnesty International USA's Margaret Huang also told NPR that many of those crossing the border were people fleeing violence and instability.

In addition to being unprepared for the administration's policy of forcing families apart, the report claimed that in some cases, DHS employees did not alert staff at shelters whether a child had been separated from their parents. Some officials would only learn of the child's status after the child told them about it.

Lawmakers have expressed concern over the report's findings. New Jersey Democrat Rep. Frank Pallone Jr., who requested the report, according to The Times, said, "This disturbing G.A.O. report shows the tragic consequences of carrying out a cruel and misguided policy impacting thousands of families without any preparation or prior notification to the agencies charged with implementing it."