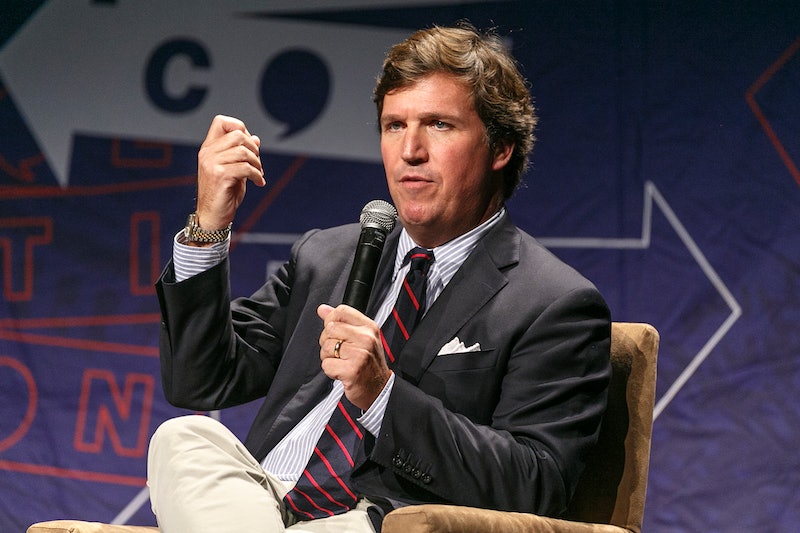 Media Matters reported on Sunday that it had uncovered tapes of misogynistic comments made by Tucker Carlson on a radio show both before and during his time hosting at Fox News. But the recordings haven't phased the host, as Carlson said he won't apologize for the past comments.

Calling into the radio show Bubba the Love Sponge from 2006 to 2011, Carlson referred to prominent women in what can be described as — at best — a derogatory fashion. He also joked about statutory rape. Bustle has reached out to Fox News for comment.

"I am not defending underage marriage at all," Tucker said in August 2009. "I just don't think it's the same thing exactly as pulling a child from a bus stop and sexually assaulting that child."

He also made light of an adult woman teacher sleeping with a 13-year-old boy. "My point is that teachers like this, not necessarily this one in particular, but they are doing a service to all 13-year-old girls by taking the pressure off," Carlson said in April 2006.

Carlson targets many prominent women in the clips, both celebrities and women in politics. One of the less offensive insults he saved for now Supreme Court Justice Elena Kagan.

"I wouldn’t vote to confirm her if I were a U.S. senator," Carlson said in May 2010. "But I do feel sorry for her in that way. I feel sorry for unattractive women. I mean it’s nothing they did. You know, she didn’t. Nobody deserves that. And men are just mean."

After the clips surfaced, Carlson pushed back via a statement posted to Twitter that described his comments as merely "naughty."

"Media Matters caught me saying something naughty on a radio show more than a decade ago," Carlson said in the statement. "Rather than express the usual ritual contrition, how about this: I’m on television every weeknight live for an hour. If you want to know what I think, you can watch. Anyone who disagrees with my views is welcome to come on and explain why."

The head of Media Matters didn't let Carlson have the final word. Angelo Carusone responded, saying that the "reason [Media Matters] released this is precisely because the things you say on your Fox News show echo the misogyny displayed in those clips." In other words, it was for context. "We were actually helping people better understand just how vile your current Fox News show is by showing what that worldview really looks like," Carusone said.

Carlson had some 20 advertisers pull out of his show back in December, after he made an offensive comment about immigration. "We have a moral obligation to admit the world’s poor, they tell us, even if it makes our own country poorer and dirtier and more divided," he said at the time, prompting businesses including IHOP and Ancestry.com to pull their ads.

Now, HuffPost is reporting that his remaining advertisers are being pressured to also pull their ads from Tucker Carlson Tonight. Among those remaining are AstraZeneca, Capital One, and Outback Steakhouse.

Only time will tell if the controversy will actually have an impact on Carlson, who has a history of making cringe-worthy remarks about women. Fox News stood by him during the December controversy over his immigration comments — but these clips might be harder to weather.

More like this
A Political Thriller Inspired By The Munich Massacre Is Coming Soon
By Darshita Goyal
Why Eurovision 2023's Host City Won’t Be Revealed For A While Yet
By Sam Ramsden and Rachel Mantock
Are John Legend & Kanye West Still Friends? The Singer’s Latest Update Is Candid
By Brad Witter
Beyoncé & Madonna’s “Break My Soul” Remix Honors A Group Of Black Icons
By Stephanie Topacio Long
Get Even More From Bustle — Sign Up For The Newsletter