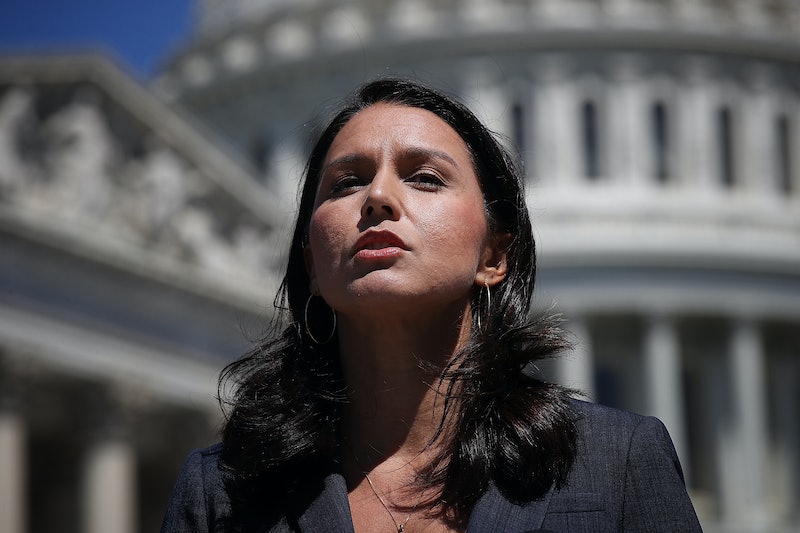 Presidential candidate and Hawaii Rep. Tulsi Gabbard rejected David Duke's 2020 presidential endorsement in a terse statement to The Hill on Tuesday. Duke is a founder and former "grand wizard" of the Louisiana branch of the Ku Klux Klan, and he voiced his support for Gabbard in a tweet on Monday.

Duke tweeted a New York Times article about Trump's remark that he wanted to keep troops in Iraq to "watch Iran." Duke wrote, "Tulsi Gabbard in 2020. Finally a candidate for President who will really put America First?" Gabbard strongly opposes military intervention, partially as a result of her time serving in the Iraq war, according to The Hill. Then, later on Monday, Duke tweeted, "Tulsi Gabbard is currently the only Presidential candidate who doesn't want to send White children off to die for Israel." Duke also changed his Twitter header photo to an image of Gabbard with the caption "Finally a candidate who will actually put America First rather than Israel First!"

In a statement to The Hill on Tuesday, Gabbard firmly rejected Duke's endorsement:

I have strongly denounced David Duke’s hateful views and his so-called ‘support’ multiple times in the past, and reject his support. Publicizing Duke's so-called ‘endorsement’ is meant to distract from my message: that I will end regime-change wars, work to end the new cold war and take us away from the precipice of a nuclear war, which is a greater danger now than ever before.

Monday isn't the first time Duke shared support for Gabbard, though. Mother Jones reported that in November 2016 Duke tweeted an article published on his website that advocated for her to be secretary of state. Gabbard responded a few days later with, "U didn't know I'm Polynesian/Cauc? Dad couldn't use "whites only" water fountain. No thanks. Ur white nationalism is pure evil."

She addressed Duke's endorsement again in December 2016, writing on Twitter:

Our movement is one of love/aloha, inclusivity. Duke represents hatred, racism, anti-Semitism, fear. We don’t want his “support.” Period.

Gabbard aligns with Democrats on a number of issues like abortion rights and the minimum wage. But she differs from them drastically when it comes to some of her foreign policy, which can align her with the "hard-right," according to New York Magazine.

The Washington Post reported that she was one of only a few Democrats to support legislation that would make it harder for Syrian refugees to enter the United States. She also met with Syrian president Bashar al-Assad — who is accused of using chemical weapons against civilians — in 2017, according to CNN. Later, she said she was "skeptical" of claims that Assad's regime was behind the chemical attacks.

Jake Tapper asked Gabbard on Jan. 20 after she announced her presidential bid if she regrets the meeting. She said, according to CNN:

No, I think that it is, it continues to be very important for any leader in this country to be willing to meet with others, whether they be friends or adversaries or potential adversaries if we are serious about the pursuit of peace and securing our country.

Regardless of how much her foreign policy views align with the right or receive criticism from Democrats, it's clear Gabbard will not tolerate endorsements from Duke or people like him.