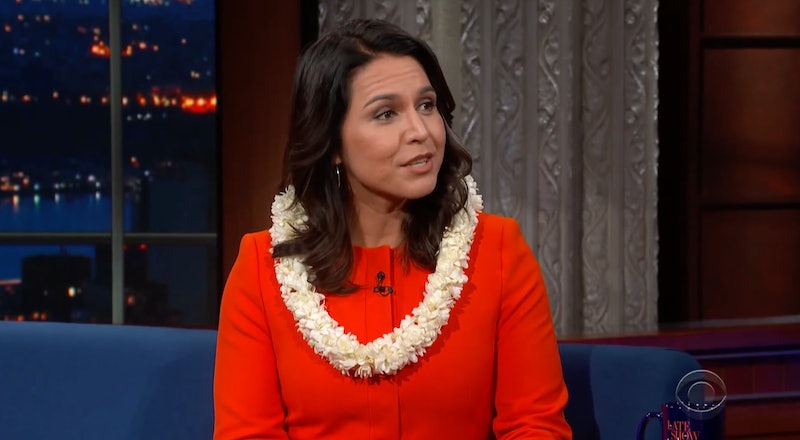 Rep. Tulsi Gabbard took the stage on The Late Show on Monday and introduced herself by listing her many accomplishments, among them that she serves as a major in the Hawaii Army National Guard, has been deployed to the Middle East, and currently serves in Congress on the Armed Services Committee. All of that plays into what Gabbard says was her motivation to run for president.

Stephen Colbert asked the Hawaiian congresswoman just that following her self introduction. "As a soldier I know the cost of war," she responded. "And the most important job that the president has is to be commander in chief."

That was just the beginning of a longer talk on war. Gabbard told Colbert that she didn't think the Iraq War or the war in Syria were worth it. "No," she repeatedly told the late-night host.

As for Syria, there was more she had to say. She talked both of a "regime-change war" that she said was started in 2011 "covertly by the CIA" to overthrow the Syrian government. She said it increased the suffering of the Syrian people and strengthened terrorists. "That's a regime change war that we should not have been waging," she said.

Colbert challenged her on this. "But if it is someone like Bashar al-Assad who gasses his own people or engages in war crimes against his own people, should the United States not be involved?" Colbert asked.

"The United States should not be intervening to overthrow these dictators and regimes that we don't like," Gabbard responded, listing Assad, Sadam Hussein, and Kim Jong Un as people better not messed with. "There are bad people in the world," she said, but history has shown us that intervention by the United States ends up "increasing the suffering of the people in these countries." She also added the cost to taxpayers and Americans' lives.

Colbert continued to push back. "I would agree, even from my limited knowledge of this that American interventionism has unintended blowback, often, both for the United States and for the people who we're trying to help," Colbert said. "But you got heat for meeting with Bashar al-Assad. Do you not consider him a war criminal? Why did you meet with that man?"

Gabbard didn't skip a beat, explaining, "In the pursuit of peace and security." Gabbard said that war is the only answer unless the United States is "willing to meet with adversaries." Gabbard on Sunday declined to call Assad a war criminal during a CNN town hall in Austin. On The Late Show, she did acknowledge the findings from intelligence agencies that he used chemical weapons on his own people.

Gabbard reiterated her opposition to such "regime change" wars and said we should be focused on how they are destructive to the people in the country and to the United States.

Once again, Colbert challenged her, saying he wasn't sure America should be the policemen of the world. "If we are not though, nature abhors a vacuum," Colbert said, "and if we are not involved in international conflicts or trying to quell international conflicts, certainly the Russians and the Chinese will fill that vacuum and we will step away from the world stage in a significant way that might destabilize the world because the United States, however flawed, is a force for good in the world, in my opinion."

Gabbard said she agrees the United States is a force good, but added, "We must actually do good."