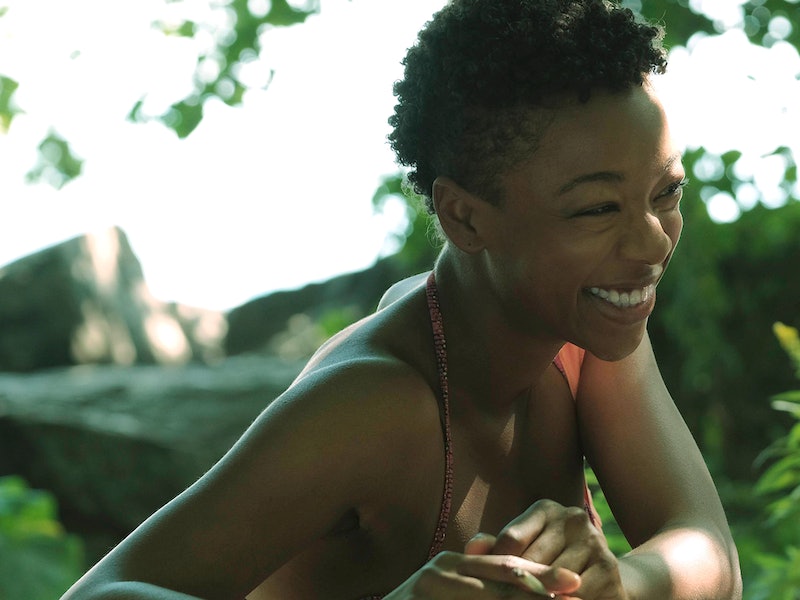 For some of us, television is an escape. For others, it’s a way to validate our lived experiences and see our own interactions with oppression reflected back at us. Throughout most of my life, I have sought out films and TV shows that I hoped would provide me with tools to better understand myself. And though, as a queer, mixed-race Latina, I have managed to find pieces of myself scattered throughout several of the TV shows I've watched, like the recently cancelled Sense8, more often than not, I’m repeatedly disappointed by the lack of nuanced representation of queer characters of color in television.

Recently, the television industry has been celebrated for increasing diversity. And, to an extent, these celebrations are warranted. Women and racial minority characters have been cropping up in TV shows across genres, and these necessary shifts should be recognized. But, it's still not enough. According to the 2017 Hollywood Diversity Report by the Ralph J. Bunche Center for African American Studies at UCLA, while minority characters — so, pretty much anyone who isn’t a white male — have gained some ground when it comes to leading roles, they remain incredibly underrepresented. Further, because the majority of writers and creators in TV and film are still strikingly homogenous, they repeatedly miss the mark when attempting to represent the nuanced experiences of queer people of color.

This being the case, it often ends up feeling like television shows only feature characters with either nuanced racial storylines or queer storylines — never both at the same time. As a queer person who is also a person of color, watching television is a fraught experience for me. Constantly, I find myself searching for characters whose stories mirror my own and, repeatedly, I come up empty-handed. I am forced to accept the few, tiny fragments reflecting my own lived experiences that I can find scattered across today’s TV offerings, but I am tired. I long desperately for television writers, producers, and networks to prioritize the centering of human experiences beyond the conventional, and I know I am not alone.

A few recent television shows, both on streaming and broadcast networks, have begun featuring people of color not only as background characters but, increasingly, as stars of the show. Netflix’s Chewing Gum and Master of None, plus HBO’s Insecure, to name a few, have all recently centered on characters of color, perhaps because they are also, crucially, written and created by people of color.

But despite this progress, characters of color who are also queer remain few and far between. Shows featuring queer characters of color, such as The Handmaid’s Tale, Orange is the New Black, Dear White People, and Sense 8 are numbered, and unfortunately, many of them have missed the mark when it comes to dynamic writing of these characters. Too often, as TV writers place increased weight on racial diversity, queer storylines wind up feeling like mere afterthoughts.

Perhaps this is why, when I learned that Sense8 had been canceled earlier this summer, I was shocked by how hard the news hit me. As I came to realize, the Netflix original, which centered on queer characters of color meant so much to so many people, due to how it featured all-too-rare nuanced, queer narratives. In Sense8, viewers engaged with the pervasiveness of machismo and cultural conservatism in Latin America while watching a romantic relationship unfold between two Mexican men. We grappled with the turbulence of trans and race politics in the U.S. through the lens of a heavily-surveilled romance between a queer transwoman and a Black woman. And given the current sociopolitical climate in 2017, shows like Sense8 provided a breath of fresh air and an opportunity for empowerment at a time when so many marginalized people feel robbed of their agency.

The multi-layered identities of characters in shows like Sense8 are stirring and complex, not strategically placed in hopes of making a series appear more diverse. The fundamental difference between these motivations is important, and is precisely what made Sense8, for instance, such a momentous achievement. Unfortunately, it is also something too many TV shows still have trouble grasping. Recently, Dear White People, a Netflix show that centers a group of Black students running up against white supremacist ideals at their postsecondary institution, featured a character struggling to come to terms with his queerness as a young Black man. But, instead of giving this storyline the thoughtful space and nuance these experiences ought to be afforded, the emphasis remained on his racial identity. This choice effectively robbed his character of the opportunity to exist as simultaneously Black and queer.

These calculated placements of emphasis, on race instead of queerness or visa-versa — as if the two identities are mutually exclusive — occur constantly in the media. Because both straightness and whiteness are considered to be default identities, placing "too much" weight on othered identities seems superfluous to some. But this only means that the burden is continuously placed on queer people of color to sift through TV shows in perpetual search of characters and storylines that feel authentic.

For most people who are white or straight, or both, watching TV is automatically a validating experience. Almost every show that has ever aired in the history of television has featured nuanced, empowered white characters with dynamic personalities and experiences to match. But for people of color, the opportunity to see ourselves accurately represented in television is diminished. And, as queer people of color, we’ve learned to consider ourselves lucky if we can find someone on TV who even remotely represents a piece of our lived experiences.

Repeatedly, we see that television shows have no problem writing glaringly obvious token characters, but writers seem to continue to balk at the idea that queer characters of color are deserving of dynamic and standalone narratives. But our experiences deserve to be more than one-dimensional afterthoughts; we are owed so much more than that.

For now, I will continue searching for shows and characters that center experiences like mine, and I have hope that this will become an increasingly achievable endeavor. But, though I’m sure some would have me celebrate the fact that I can find any elements of myself represented in mainstream media, I will not be satisfied until queer characters of color — with lives like mine, my partner’s, my friends’ — come standard in television. After all, no matter how many pieces of ourselves we can manage to find scattered throughout media, tiny fragments don’t add up to a whole.