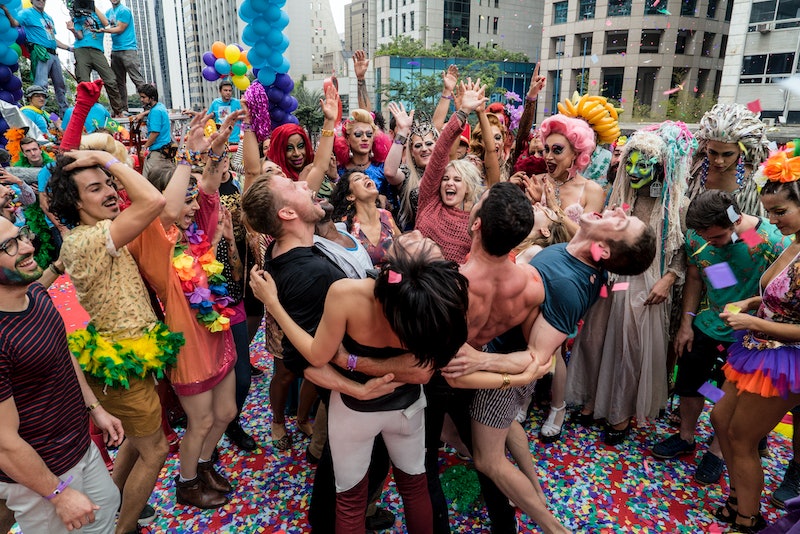 Netflix confirmed on Thursday that Sense8 has been canceled after two seasons, leaving the expansive and wildly original story of eight strangers who find themselves telepathically connected open-ended. Fans have taken the announcement with a heavy heart, but a tweet from user @blackthornjem points out something that makes the news all the more devastating: Sense8 was canceled on the first day of pride month.

This may be especially disheartening for the show's LGBTQ viewers, as the series has been repeatedly hailed for LGBTQ representation. It was perhaps one of the most inclusive shows on television, with an array of ethnically diverse characters with various sexual and gender orientations.

Among the central relationships featured were Lito and Hernando, two men struggling to introduce their private relationship to their city's homophobic public eye, as well as Nomi Marks, a transgender woman in a relationship with her cisgender girlfriend, Amanita. The main characters, known as "Sensates," also frequently engage in orgies that push even those seemingly at opposite ends of the sexuality spectrum beyond their understood orientations. Actor Brian J. Smith, who plays a Chicago cop haunted by his childhood, explained on Twitter that co-creator Lana Wachowski — who is also transgender — considers all of the characters pansexual, an identity not often explored with such seamlessness and depth.

In her Sense8 cancellation announcement, Netflix's VP of original programming, Cindy Holland, praised Sense8's "bold," "emotional," and "stunning" narrative, but didn't mention the reasoning that led to the decision. Notably, it comes less than 24 hours behind Netflix CEO Reed Hastings' comments to CNBC that the streaming hub would likely start canceling more shows.

Sense8 may not have been Netflix's biggest or buzziest endeavor, but it was critically beloved and had an eager, devoted fan base. It's unfortunate that in a world where the LGBTQ community must consistently push to see their perspectives reflected on screen, a show that so profoundly resonated was canceled, let alone at a time as meaningful as the first day of pride month.