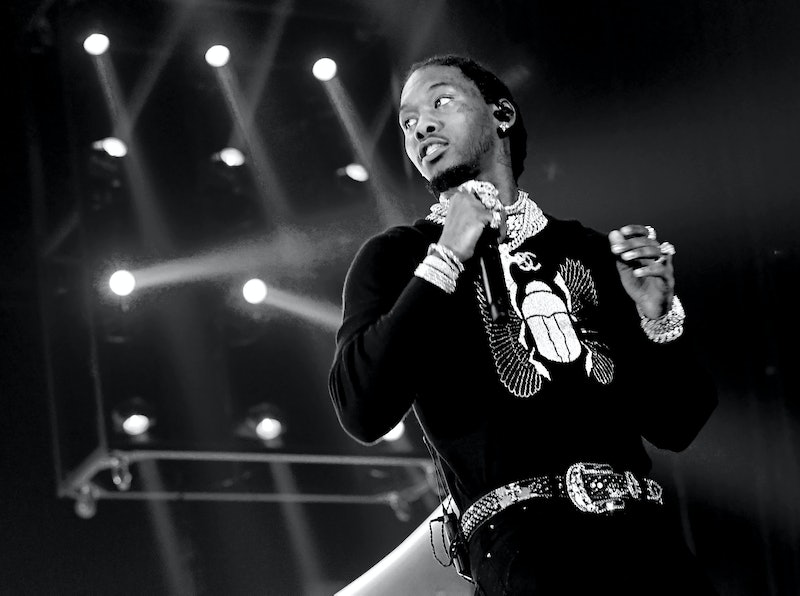 The 2019 BET Awards kicked off in style with a high energy performance from Cardi B and Offset. The hip-hop couple hit the stage with a ton of dancers in tow to perform their latest hit “Clout” together before Cardi capped off the set with “Press.” Fans are used to seeing Cardi’s signature sexy dance moves but viewers were shocked to see Offset dance at the BET Awards. Apparently Cardi B isn't the only one who knows how to move in this relationship.

The Migos rapper actually appeared onstage before his wife with a crowd of male dancers dressed in all Black and hit every move while rapping his verses. It was a pleasantly shocking moment for fans who had probably never seen him do a full-blown choreographed routine that seemed straight from You Got Served.

He was soon joined by Cardi B herself, who stunned everyone with an emerald green ensemble and dark purple locks. Offset took a temporary seat for a lap dance as he mouthed the words to Cardi's verses, but it wasn't long before he was back on his feet again. The audience soaked up every moment of the brief performance with a ton of cheering and praise for the rap pair.

Of course, there’s no better way to judge a person’s performance skills on an awards show than by checking Twitter for reactions. After all social media is the prime place for reactions without any filters and an overabundance of thoughts about what a celebrity did right and should never do again. Thankfully, the general consensus from Black Twitter is that Offset’s moves are worthy of some serious praise and perhaps a bit of harmless laughter, too.

Now that Offset has revealed his new skills to the universe, perhaps this will lead to a joint tour between the husband and wife duo. Imagine Offset doing a series of full dance breaks (that he choreographed, of course) alongside Cardi B for a couple of hours. Now that's something that fans will be willing to shell out big bucks to see live onstage.

Or maybe he has more hidden talents to share with his fans. Can Offset skateboard, do gymnastics, or walk a tightrope? Does he do magic or any kind of stunts? Anything seems possible at this point. But, for now, everyone will be able to enjoy the abundance of entertaining video clips, tweets, GIFs, and memes that are sure to come from this performance.

Needless to say, Cardi B and Offset's opening number at the BET Awards will be talked about for many days (and maybe weeks or months) to come. Cardi usually shines the brightest but this time Offset made sure he took full advantage of his big moment on stage as well. And, the Twitter stamp of approval means he made a good call to step outside of his comfort zone and dance like no one was watching — even though literally everyone was. And probably won't let him forget it.