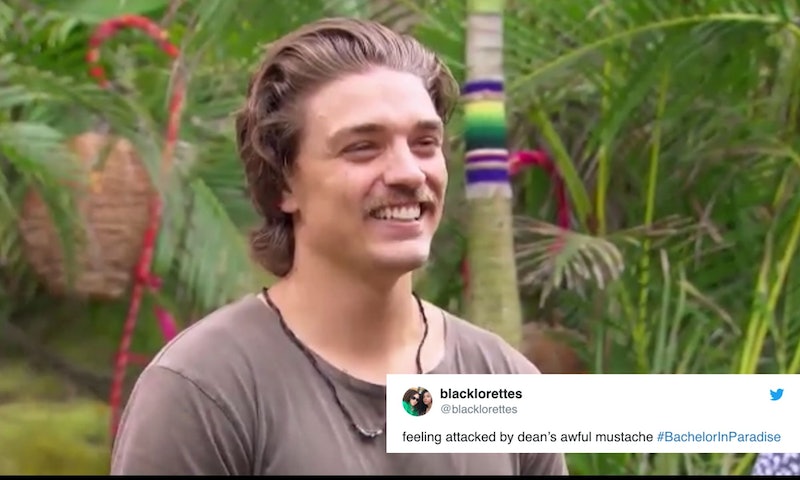 After his ill-fated love triangle on Season 4 of Bachelor in Paradise, Dean Unglert is back — and he brought some brand new facial hair with him. When he arrived in Paradise on Tuesday, fans couldn't stop tweeting about Dean's mustache. And as unflattering as it might be, it's also comedic gold.

Between his podcast, his social media presence, and his appearances on The Bachelorette and now two seasons of BiP, Dean has definitely become a very visible member of Bachelor Nation. But normally, he's sporting a clean shaven face, so this look of his was definitely new — and of course, Demi snarked on it as soon as she arrived.

It didn't do much to keep the women away, though (especially not Caelynn, who immediately seemed interested in him), but when it comes to fans, there are a lot of opinions, and fortunately for those of us watching at home, they've shared those opinion on Twitter in some seriously funny tweets. And if witnessing Dean's mustache is what we had to do for these laughs, it was probably worth it. (And yes, somehow, Dean still has the good old Dean charm, even with the mustache. How does that happen?)

Some fans were really not into it:

This person couldn't understand why Caelynn was attracted to Dean despite the mustache, but to each their own, right? Besides, there's a lot to love about Dean other than his facial hair (and his behavior last season, but that's a story for another day).

Another tweet pointed out that Demi's reaction Dean's mustache was the correct one. The jury's still out on that one, but the fact that she just burst out laughing as soon as she saw him was a pretty great moment.

On the flip side of the coin, plenty of people were also super into the mustache, because that's just the way attraction works. Some people are into facial hair, and others aren't... but a lot still were, and they weren't shy about sharing it.

And yes, in case anyone was wondering, Dean's mustache does already have its own Instagram account, because of course it does.

And yes, of course Dean responded to this tweet:

Above all else, it's good to see that Dean is, at least, keeping a good sense of humor about all of this — and that he shaved before he attended Ashley I. and Jared's wedding over the weekend, which was probably for the best.

Cringey mustache aside, it seems like Dean is already having a good time in Paradise, and isn't that what matters most? Well, and grabbing a rose at the next rose ceremony since the women have all the power now, but so far, it doesn't seem like Dean will have trouble making that happen. Especially after how badly his last time in Mexico went, let's hope it's all smooth sailing.