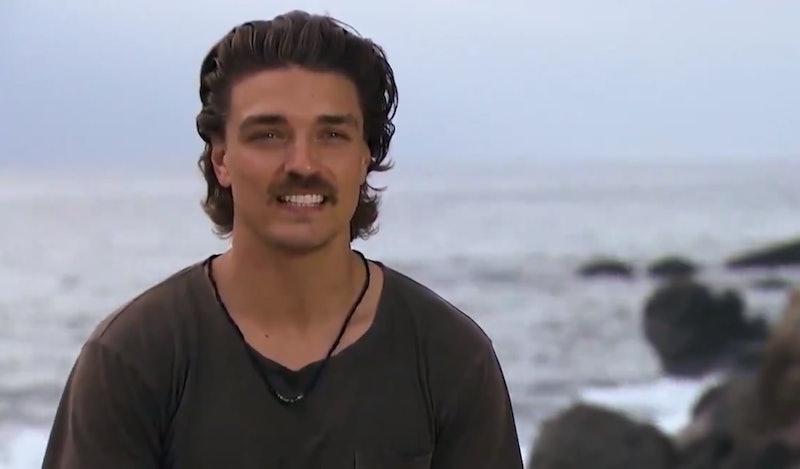 Break out your pink flamingo pool float, because it's time to head back to paradise. During Monday night's episode of The Bachelorette, ABC premiered a new Bachelor in Paradise Season 6 trailer with enough drama to make Bachelor Nation wish they could fast-forward to the Monday, Aug. 5 premiere. There's tears, accusations, and the surprising debut of Dean Unglert's mustache. (That's right, Deanie Baby is looking for love on the island again after his Season 4 stint on the show didn't go so well.)

Even Dean's mustache can't distract from the promo's biggest source of drama: Blake Horstmann. While he's best known for vying for Becca Kufrin's heart, he may be a little bit too excited about being on the island. Demi Burnett, from Colton Underwood's season of The Bachelor, is super confused by Horstmann, who she claims kissed one contestant before they arrived on the island and is not romancing several others. "He's just gotten himself into a bit of a sticky situation," Dean noted. "We've all been there before." Seriously, when did he get so wise?

Elsewhere, John Paul Jones, who recently tried to woo Hannah Brown, gets into an intense discussion with returning Bachelor in Paradise star Derek Peth, who John Paul accuses of taking advantage of women. It's a lot. But thankfully Chris Harrison is on hand to float around on a flamingo in the pool while wearing a suit to balance some of the dramatic tension.

However, the most talked about contestant at the moment is definitely Dean's mustache. Is it a sign of a more grounded Dean? Is he just trying something new? The only thing that's certain right now is that Twitter has a lot of feelings about that 'stache after its big trailer reveal. Twitter user @maddie_pants pointed out that Deanie Baby is giving off some serious Ned Flanders vibes (which isn't necessarily a bad thing), and @pizzapaigeb declared him a "hipster Charlie Chaplin." And @MeganVickeryyy said what Bachelor Nation was thinking, writing, "Did anyone else go “..............OH MY GOD THATS DEAN?!” During the Bachelor in Paradise commercial?!"

Between's Dean's new look and the sheer amount of romantic entanglements introduced in the trailer, it's already clear that Season 6 is going to be one to watch. Bachelor in Paradise never fails to deliver on the drama, but this season appears poised to hit the ground running with a potential love triangle for Blake and whatever has John Paul and Derek at odds. And that's just a handful of the contestants looking for love.

Head to the bar and have Wells mix you up a drink and settle in, because Bachelor in Paradise is about to make your summer a whole lot more interesting.