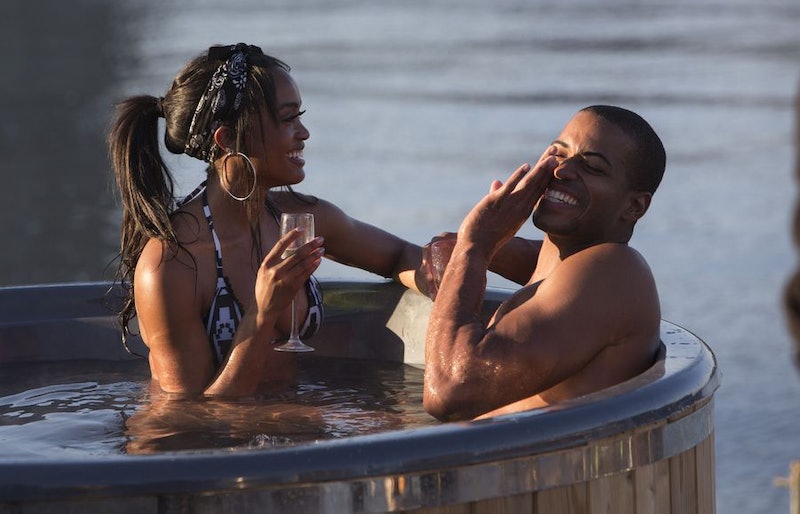 It is really getting serious on The Bachelorette. It felt like a million people went home Monday night, and fans are confused by Rachel's selections. Sure, it's her life and she can choose who she wants, but there were so many tweets about The Bachelorette that express confusion about her final six men.

Obviously, viewers do not get to see every single thing that happens during filming, but it's just so confusing when people are still on this show even though they have had very little screen time. Viewers have no idea who Matt and Adam are. It's no offense to them, but whoever is editing these episodes is giving them no time to shine. They have no backstories. Does anyone know anything about them? Nope, at least not based on what was shown.

Just as a refresher: Adam is the one who brought that doll on night one and Matt dressed as a penguin. Sure, they had some interesting stunts in the beginning, but they didn't make a lasting impression, like Alexis Waters (dolphin costume) and JoJo Fletcher (unicorn head) did after their quirky limo entrances. Who are they? And why did they stay over Alex? Seriously? What is going on here, Rachel?

Sure, it was pretty obvious that Bryan, Peter, and Dean would make it this far, but at this point there are more questions than answers when it comes to this top six.

This was an injustice.

2. Where Is The Footage Of Rachel With Matt And/Or Adam?

Can the show release the footage? Justification for these selections is so necessary.

3. What Happened To Will?

Will had final four potential, but he seriously crashed and burned on that date.

4. Who Are These People?

When did these guys get here? Did they just show up this week?

That really could have been a game changer.

The fans need to see this footage.

7. Why Is The One With The Dolls Still Here?

How did this happen? What is going on?

8. What Is Adam Talking About?

Did Rachel even have a "snack," though? When did this happen?

9. Is Adam Jr. The Real Reason That Adam Is Still Here?

This could make sense.

10. How Is The Doll Getting More Screen Time Than Actual People?

That's because he has. At this point it seems like Adam Jr. will end up with a hometown date.

Of course, viewers haven't seen everything, but there are plenty of fans who are so thrown off by this top six. There are so many unanswered questions at this point. What is going on? Maybe we'll finally find out next week.

More like this
JoJo Fletcher & Jordan Rodgers Got Married In A “Playful & Fun” Wedding
By Grace Wehniainen
Twitter Is Upset About The 'American Idol' Top 3 Results: "Who TF Is Voting?"
By Jake Viswanath
How 2 'American Idol' Singers Performed With COVID-19 & Made It Into The Top 5
By Jake Viswanath
Twitter Is In Utter Meltdown After 'Derry Girls’ “Poignant” Finale
By Sam Ramsden
Get Even More From Bustle — Sign Up For The Newsletter