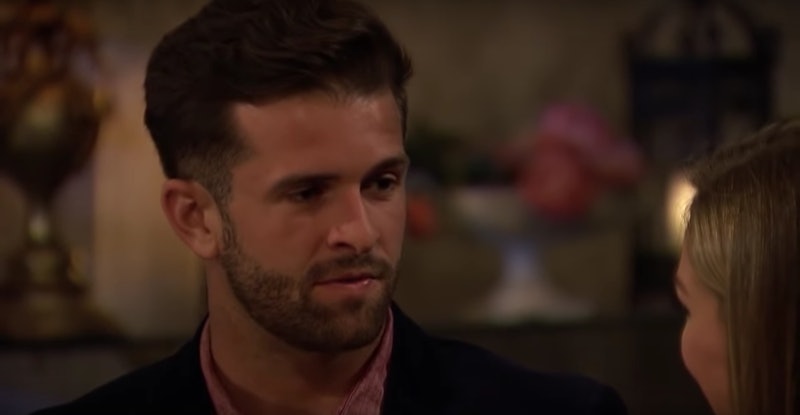 In comparison to Luke P.'s never-ending drama, Jed has thus far seemed like a genuine, inoffensive Bachelorette contestant. Initially, his confession that he came on the show to promote his music career, but is not actually falling for Hannah, seemed refreshingly upfront, and Hannah said she appreciated his honesty. But as of Monday night, tweets about Jed show Bachelorette fans are starting to get suspicious.

Jed might claim that he's now here only for Hannah, not to further his music career, but he sure is keen to pull out a guitar every chance he gets. He showcased his music during a talent show date, during several moments in the mansion, and most recently this week, he stood outside Hannah's bedroom window and played until she let him in. During the end credits of the episode, after we knew he received a rose at the end of the night, viewers also saw him crooning at the piano.

It's all been a little much for Bachelorette fans. Music is obviously a big part of Jed's life, but considering the reason he came on the show, it's starting to make him seem disingenuous.

Jed's singing on Monday night wound some fan up for another reason, too — in an explosive report published earlier this week by People, Jed’s ex-girlfriend claimed they were still dating when he arrived at the Bachelorette mansion. Bustle reached out to Jed for comment, but has not yet heard back. However, Jed did address his Bachelorette controversy on Instagram, writing:

Musician Haley Stevens claimed in the report that she and Jed "spent the night together the night before he headed to L.A.," and that he told her the show "was just an obstacle and we'd be stronger on the other side because of it." She also confirmed Jed's account that he went on The Bachelorette to further his career. "He said he only wanted to be top five … to be a major player so that it would be beneficial," Stevens continued.

She then claimed that Jed didn't call her when he returned from filming the show, and that aside from an awkward interaction in which he said he "didn't know what to say," they haven't spoken since.

Of course, we don't yet know Jed's side of the story. But whatever the truth may be, and whatever happens with Jed and Hannah’s relationship, fans seem to be soured on the musician after the accusations, and Monday night's episode only worsened the matter. Particularly because Jed's serenade to Hannah included a lyric about never telling a lie, Twitter was not buying it. Even Bachelor alum Tia Booth weighed in:

Hopefully this girlfriend thing is all a big misunderstanding — Hannah doesn't deserve that kind of deception, nor does any other woman who might be waiting for Jed back home. It certainly sounds sketchy, though, and Jed would be wise to come forward with more details either confirming or denying these suspicions. Who knows, maybe he could even write a song about it. That is what he came to The Bachelorette for, isn't it?