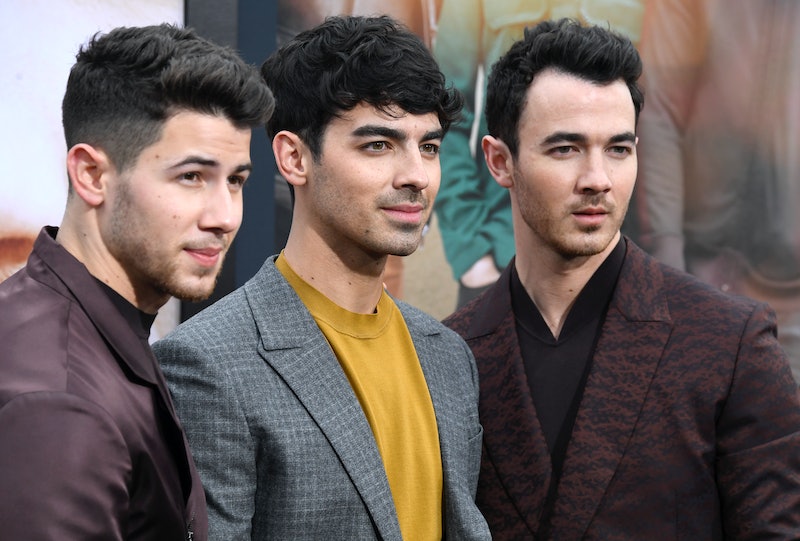 The Jonas Brothers made their triumphant return to the MTV Video Music Awards on Monday night, but it wasn't without its hiccups. In a somewhat typical, but in no way excusable, mix-up, a countdown clock blocked one of the faces of the members of the group! And, yes, fans noticed, as these tweets about Kevin Jonas' face getting blocked on the VMAs red carpet show. Spoiler alert: they were not happy.

It's not a secret that Kevin was always the first Jonas Brother to be named the odd one out in the group. While Nick and Joe Jonas were quick to be labeled heartthrobs, Kevin was more of a slow burn for fans. And while Joe and Nick went on to have successful solo careers after the Jonas Brothers temporarily broke up, Kevin took the time to start a family, which kept him out of the spotlight. Kevin stans have been ecstatic about his return to the spotlight with the Jonas Brothers' comeback album Happiness Begins, and so they were less than pleased to see MTV block his beautiful face on the red carpet with a countdown clock promoting the awards. As fan @FrankieRoyce summed up, "Man, they always do Kevin wrong."

Fans couldn't handle the disrespect. Kevin did not wait six years to reunite on stage with his brothers for this!

To say fans were distressed would be an understatement. But some, like @_aleramiirez, found the situation all too relatable. "Kevin is how I feel in every situation," this Twitter user wrote. (And everybody with social anxiety raised their hands to say, "same.")

There was one particularly hilarious reaction among fans that compared Kevin's dilemma to one Mike Wazowski. For those of you who don't know, Mike Wazowski is the green, one-eyed hero of Monster's Inc., who finds himself often overshadowed — both literally and figuratively — by his scare partner Sully. In one especially iconic moment of the 2001 Pixar classic, Mike and Sully are watching a their commercial debut on TV, but Mike is almost completely obscured by the Monster's Inc. logo. His reaction? "I can't believe it... I was on TV!"

And, hey, maybe Kevin will take a page out of Mike Wazowski's book and look on the bright side? At least he got a great Twitter moment out of it — the moment has even been given the meme treatment already.

Of course, Kevin wasn't the only celebrity who fell prey to the countdown clock. Many people got their heads' blocked by the massive logo throughout the night. It wasn't personal. So, look on the bright side, Kevin. Not only are you like a beloved animated character, you're still nominated for some Moon People! And, you're performing at the 2019 VMAs. All in all, it's not a bad night to be Kevin Jonas, countdown clock included.