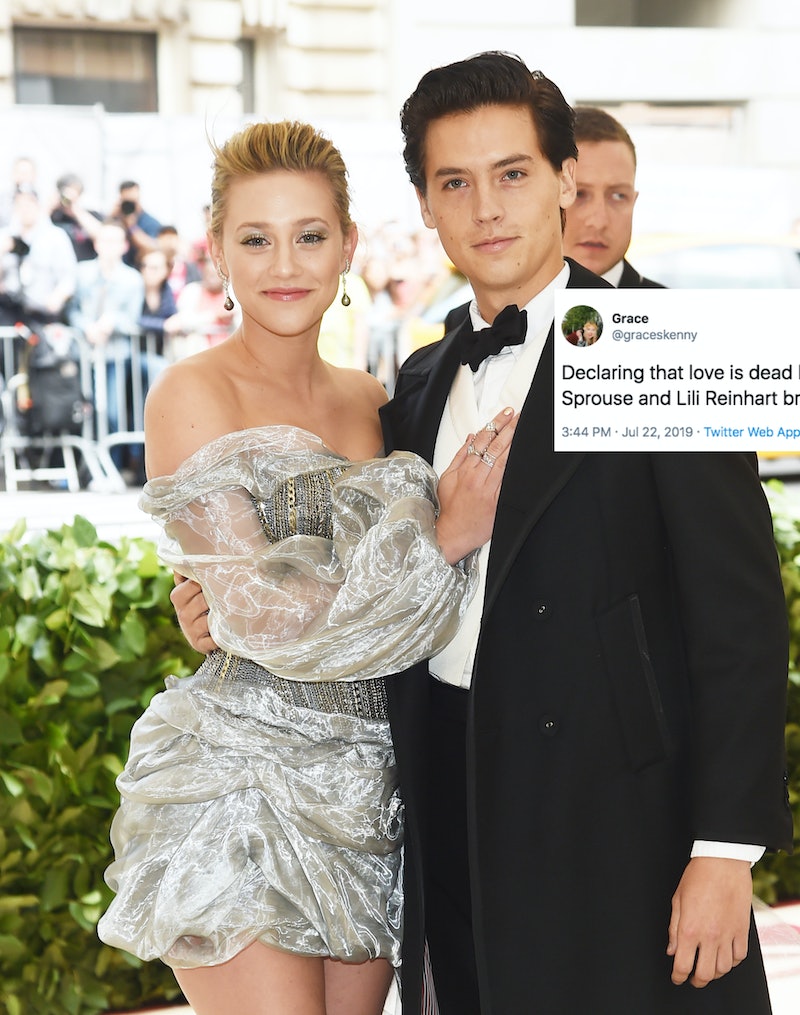 For many Riverdale fans, the reports that Lili Reinhart and Cole Sprouse may have broken up hit hard. And the tweets about Reinhart and Sprouse's reported split showcase exactly how many "Sprousehart" shippers are heartbroken by this potential relationship update. (Bustle has reached out to both actors' reps for comment.)

In case you missed it, on July 22, sources such as Us Weekly and E! News reported that the Riverdale stars had broken up after two years of dating. "Lili and Cole broke-up earlier this summer," a source told E! News, "The two are not living together this season." The insider also claimed to the publication that the two had "intentionally keeping their distance from the other;" but that they are on "much better terms" now that Riverdale has begun production again.

According to Us Weekly, Reinhart and Sprouse reportedly kept their distance from each other over the July 20 weekend during Comic-Con. They reported that they were spotted hanging out with their fellow cast members but that they were rarely seen together. Neither Sprouse nor Reinhart have commented on the split. But, many of the couple's fans have taken to Twitter to make their voices heard, and they have not held back their feelings.

Not Taking It Well

This Twitter user utilized a GIF to showcase how heartbroken they were upon hearing this recent Reinhart and Sprouse news.

Right in the Feels

Many, many fans were heartbroken to hear that their favorite celebrity couple has reportedly split. Clearly, Sprouse and Reinhart's relationship had a major impact on their legions of fans.

One Twitter user went so far as to say that "love is a MYTH" upon hearing the news about their favorite offscreen Riverdale couple.

Yet another user said that "love is dead" since the couple reportedly couldn't make things work.

This fan's use of emojis says it all about how many "Sprousehart" shippers are feeling right about now.

Will Riverdale Even Be The Same?

This user said that their Riverdale viewing experience may be a bit different now that two of the show's leads (who's characters have an on-again, off-again relationship onscreen relationship) have reportedly broken up.

Like many others, this Twitter user is "not okay" to hear this news about the Riverdale stars.

As these other reactions would indicate, this user's tweet about the reported split, in which they said they're "so upset" about it," speaks for a lot of the Riverdale fandom.

This fan simply can't believe that the news about Reinhart and Sprouse is real, questioning it with, "Say it ain't so."

The News Is Rough

This fan is having a "rough day" and, unfortunately, it has everything to do with the Riverdale stars' supposed split. I'm sure many fans can agree with that sentiment.

Even though Reinhart and Sprouse have not officially confirmed the split for themselves, the reports about their supposed breakup were clearly enough to leave fans officially heartbroken.

More like this
Twitter Is Having A Meltdown Over Buying Beyoncé Renaissance Tour Tickets
By Jake Viswanath
Twitter Is In Awe Of Taylor Swift’s “Lavender Haze” Music Video
By Jake Viswanath
Beyoncé Has Officially Won The Most Grammys Ever & Twitter Is Losing It
By Jake Viswanath
Dennis Quaid Dropped A Huge Parent Trap Revelation Via Taylor Swift's "Anti-Hero"
By Catharina Cheung
Get Even More From Bustle — Sign Up For The Newsletter
From hair trends to relationship advice, our daily newsletter has everything you need to sound like a person who’s on TikTok, even if you aren’t.