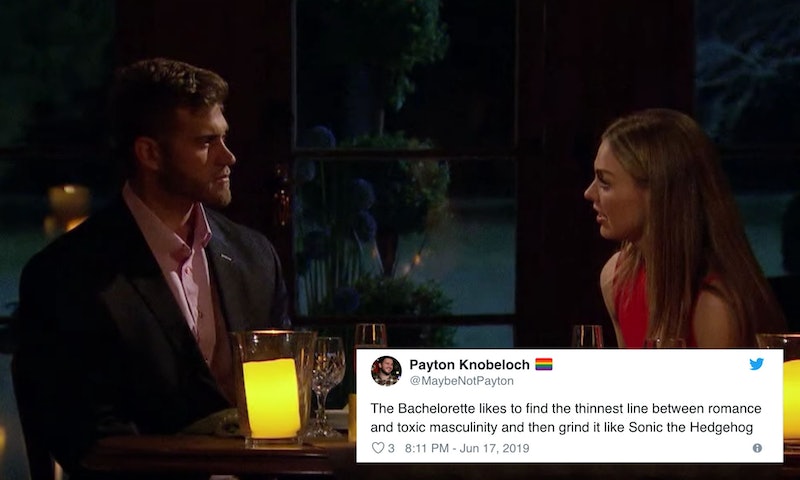 On Monday night's episode of The Bachelorette, Luke P. left...then came back despite Hannah asking that he respect her decision to send him home. To him, convincing Hannah to let him stay was a romantic gesture that showed how much he cares about her. But as several viewers on Twitter pointed out, it's actually a prime example of toxic masculinity.

Though we can't know what Luke's true intentions were, his behavior came off as aggressive and manipulative. It's like he thinks he's in The Notebook, hanging from a ferris wheel until he gets a date, which in itself was not OK. Luke P. is playing every toxic male card in the deck as though he's reading them from a script. And he is not fooling anyone, except, at least in some ways, Hannah.

After Hannah asked Luke P. to leave, she should not have seen him again in the house. She has many other more even-tempered suitors she could be focusing her attention on instead of nursing Luke P.'s drama and ego, and fans are ready to see him get the heck out of there. As the events of the night unfolded, Twitter became more agitated by the minute:

Hannah isn't completely unaware of Luke's red flags, as she's now made clear, though she hasn't decided any of them are deal-breakers just yet. That became apparent when, upon Luke's return, he got into yet another confrontation with the other contestants. After listening to them all fight from the other side of the wall, Hannah stormed in and put them all in their place.

"I'm a grown ass woman, and I can decide if I want to spend my time figuring all this out or if I don't," she said. "You're not in my conversations with him, just like he's not in the conversation with all of you. Not defending him in any way, because before any of you said anything to me about him, there were concerns."

Hannah may as well be speaking to those of us watching at home. She's certainly capable of making her own decisions, but she's in an already stressful situation, and it sucks to watch someone like Luke disrupt what might have been a much more peaceful season. As much as the other men do need to rise above his drama, it's impossible to ignore the fact that Luke's behavior has taken over everything.

Hannah still inexplicably gave Luke a rose during the cocktail party ceremony, but she said that she wants the guys to trust that she knows what she's doing, and that she has her reasons for making the choices she's making. As she told Chris Harrison toward the end of the episode, she's lost a lot of hope, but she's going to "see this this thing through to the end." All we can do as viewers is sit tight, watch in agony when (it's not even if at this point) more drama unfolds, and hope that our girl Hannah comes out happy in the end.