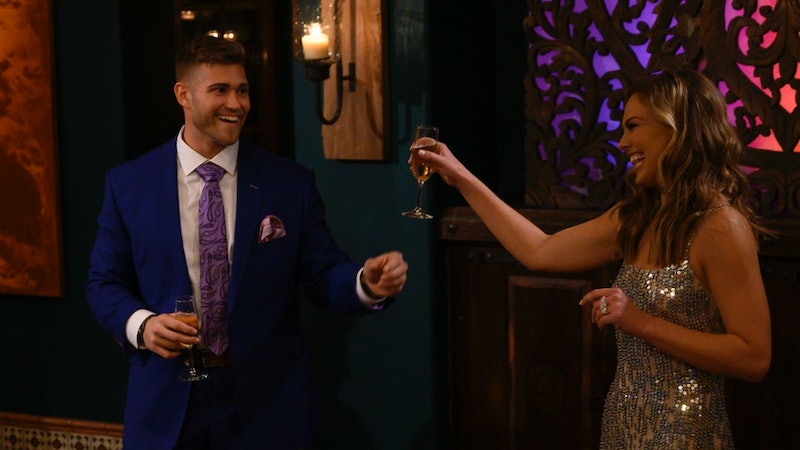 Tuesday night's episode of The Bachelorette concluded with a very tense one-on-one, but it ended without giving us any real resolution about if Hannah B. sends Luke home. We saw Hannah repeatedly question him about his intentions and why he's caused so many problems with the other men. At the same time, she's said more than once that her attraction to Luke P. is stronger than with anyone else. So is this the end of the road, or will he live to see another day?

Let's first recap their night together, because there was a lot to parse through. Hannah told Luke P. that she needs to squash any drama with him once and for all, and that she wanted to get to know the real him. She then (rightfully) got frustrated when he continued to respond in vague platitudes about how the world is against him, everyone else is lying, and he just wants to give her "clarity." Everything Luke said only seemed to add to Hannah's irritation, up until the final moment when she lifted the rose and delivered her verdict. Apparently, and unsurprisingly, this was not a rose-worthy date. But does Luke leaving the one-on-one without a rose mean his turn on The Bachelorette is over?

Unfortunately for Bachelorette viewers, the previews for the rest of this season do appear to include more Luke P. So, chances are he'll be getting a rose somehow, and neither fans or the other men will be happy about it. In fact, Hannah continuing to keep Luke around could cause a rift with the other relationships she's forming. Several men have already mentioned that her attachment to Luke makes them question her judgment. Jed said specifically that he expected Hannah to see Luke for who he really is soon: if she keeps Luke around for another week, could that change his feelings for her?

The preview for next week showed Luke bent over praying, which may be a callback to the conversation he had with Hannah on their date. It did seem to be a moment of connection for the two when Hannah opened up about the two sides of her personality, and Luke chimed in excitedly to say he felt the same. But again, that moment happened because Hannah was able to open up emotionally: the issue here, for Hannah, is that Luke doesn't seem able to reciprocate.

Beyond the glimpse of that prayer scene, there's evidence in ABC's Bachelorette season trailer, posted in May, that Luke P. is sticking around longer. In the above trailer (around the 2:12 mark), Luke P. is bent over Garrett screaming in his face: "I've been nothing but truthful with Hannah, and you are not going to mess it up!" It's a classic Luke P. moment, and footage that hasn't yet aired on the show. In other words, it's a solid sign that not only does he stick around, he doesn't spend the upcoming weeks repairing his relationships with the other men.

Even if Hannah doesn't care about Luke P. getting mad during a rugby game, she has to care about the fact that his rage doesn't stop off the field — and judging from the season trailer, Luke P. gets no closer to getting his anger under control. If Tuesday night's date wasn't enough of a red flag for Hannah, hopefully his continued aggression will be.