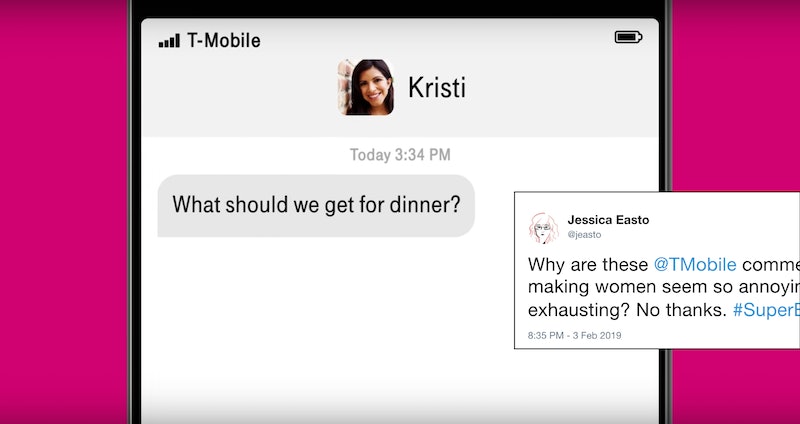 Usually the aim of Super Bowl ads is to get people talking, right? Well, one brand may not have anticipated the reaction to their commercial this year. On Sunday, T-Mobile's 2019 Super Bowl ad sparked backlash on Twitter. Some people pointed out the ad's portrayal of women felt a bit sexist. The apparent takeaway from the commercial? Women can't make up their minds about what to eat for dinner, and oh wow, it's so annoying to the men in their lives, who would rather have tacos instead of sushi.

In 2019, the idea that women are overly indecisive is unfairly stereotypical — not to mention, it's played out. It also doesn't probably help the situation that the song in the background is Fine Young Cannibals' "She Drives Me Crazy." With lyrics that include, "She drives me crazy / like no one else," it only furthers the notion that the woman in the video is difficult to be around.

While the commercial was likely intended to spark some laughs among couples who find themselves in the perpetual "What do you want to eat for dinner?" debate, the joke seemed to be a swing and a miss, according to Twitter at least. Instead of coming across lighthearted, the internet was not about it — at all.

Here's T-Mobile's Super Bowl commercial titled "What's for Dinner?", which also appears to be a partnership with Taco Bell:

Again, it's worth noting that the ad was likely created with pure intentions, trying to poke fun at couples' common disagreements over meal choices. But unfortunately, good intentions don't always translate, especially when the end result seemingly gives women the short end of the stick.

And to air the commercial during the Super Bowl — when even more eyes are on the screen than usual — definitely led to a large amount of Twitter criticism. Here's a range of the reactions on social media during Sunday's game.

As pointed out in the above examples, women being indecisive feels like an outdated notion, and in 2019, brands are expected to know better.

There was also some more sarcastic takes that got their point across pretty effectively.

Others basically called it how they saw it in a straightforward way.

Meanwhile, a few people responded with questions that may or may not have been rhetorical. (OK, they definitely were rhetorical.)

For some, the message was a big nope.

If you're cringing when watching the T-Mobile ad, it sure seems like Twitter is right there with you. Who knows, maybe the brand will take all the feedback to heart and there will be a future commercial that debunks these stereotypes to rectify the situation — while still giving out plenty of free tacos. Because really, it's hard to disagree with that aspect of the ad. More tacos and less sexist stereotypes in 2019, pretty please?