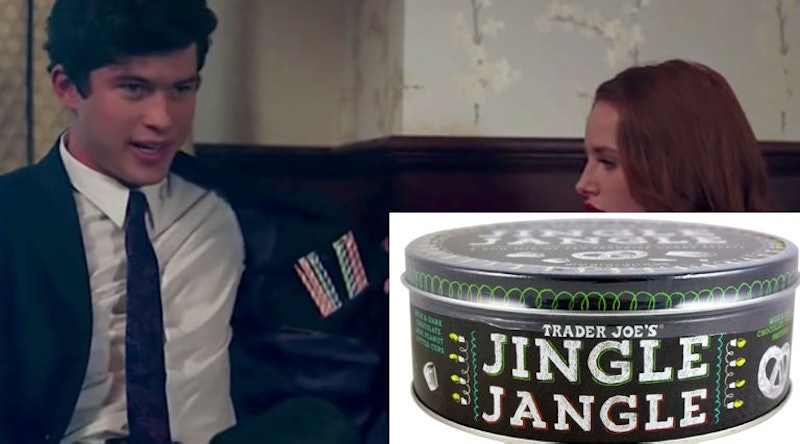 So, here’s something mildly hilarious: Trader Joe’s sells a holiday-themed treat called Jingle Jangle… but in light of the significance of the phrase “jingle jangle” to the current season of gritty Archie reboot Riverdale, the burning question, “Is Trader Joe’s Jingle Jangle connected to Riverdale?” has been on the tip of a somewhat unexpectedly large number of fans’ tongues. The answer, of course, is no; indeed, said a Trader Joe’s rep to Vulture, “Trader Joe’s Jingle Jangle was introduced years ago,” which means it pre-dates the show by quite a bit (season one originally began airing in January of 2017). Most fans also seem to be aware of the fact that the identical names are just coincidence — but despite that fact, Twitter is having a field day with the whole thing. (Bustle reached out to Trader Joe’s for comment, but received no response by press time.)

For those who haven’t been following Riverdale, the second season of the show, which premiered in October and just aired its seventh episode on Nov. 29, has featured the mystery of a street drug called “jingle jangle.” We don’t know exactly what jingle jangle is; however, it appears to be a stimulant, as Reggie (Charles Melton) describes it something that can “keep you up for days… in more ways than one.” Maybe there’s a little Viagra action going on there as well? Who knows. In any event, jingle jangle is probably an upper and is packaged as something resembling the candy Pixy Stix. Betty (Lili Reinhart) has spent the past few episodes investigating the true identity of the town’s jingle jangle dealer, who has hitherto been known only as “the Sugarman.”

And, indeed, Jingle Jangle has been around since long before Riverdale was even a glimmer in anyone’s eye — that product description is from 2014. “Trader Joe’s Jingle Jangle was introduced years ago,” a representative for the company told Vulture. “It’s just a fun name that plays off of sleigh bells referenced in Christmas carols, since it is a holiday item. It’s also a fun way to describe the sound customers might hear when they give the tin can a shake.” When NY Mag associate editor Madison Malone Kircher, who penned Vulture’s investigation, followed up with the query, “Safe to say it has nothing to do with a fake drug distributed to teens in pixie sticks [sic] on a television show?” the representative responded, “Very safe to say.”

To be honest, I’m having a little trouble taking the idea of a drug called “jingle jangle” seriously, because… well, the phrase itself is just so ridiculous-sounding. To be fair, it’s meant to sound ridiculous; given the fact that it's an onomatopoetic representation of the sound sleigh bells make that is, as the TJ's rep pointed out, often used in Christmas carols, and given that Christmas carols are generally light-hearted and fun, it’s OK that the phrase sounds a little silly within that particular context. Within the context of a street drug crisis, though? It’s just… weird. “Pssst. Hey kid. Do you like jingle jangle?” is on par with “Pssst. Hey kid. Do you like muffins?” for me.

But perhaps that’s why the denizens of Twitter are having such fun with this particular name coincidence: It’s goofy and weird and involves entertaining TV and delicious treats. What’s not to love?

Here’s a small sampling of what folks have been saying:

That's it. We've solved the mystery. Good work, everyone. Time to go home.

2. It's What The Cool Kids Are Doing

3. Who's Really Running The Show Here?

We've been looking too hard for the Sugarman. He was at the local TJ's the whole time.

For the curious, your local Trader Joe's hours can be found on the store locator page on the TJ's website.

6. So Much For Flying Under The Radar

It's about supply and demand.

7. Let Me Speak To Your Manager

9. The Lady Doth Protest Too Much

Again, I do have to reiterate that Trader Joe's Jingle Jangle is a chocolate-covered snack mix, not a drug; nor is it related in any way, shape, or form to Riverdale.

That said, though, this joke is A+.

In any event, should you desire to procure some chocolate-covered, non-drug-related Jingle Jangle from Trader Joe's, these Twitter photos seem to indicate that this year, it's running at around $8.99 per tin.