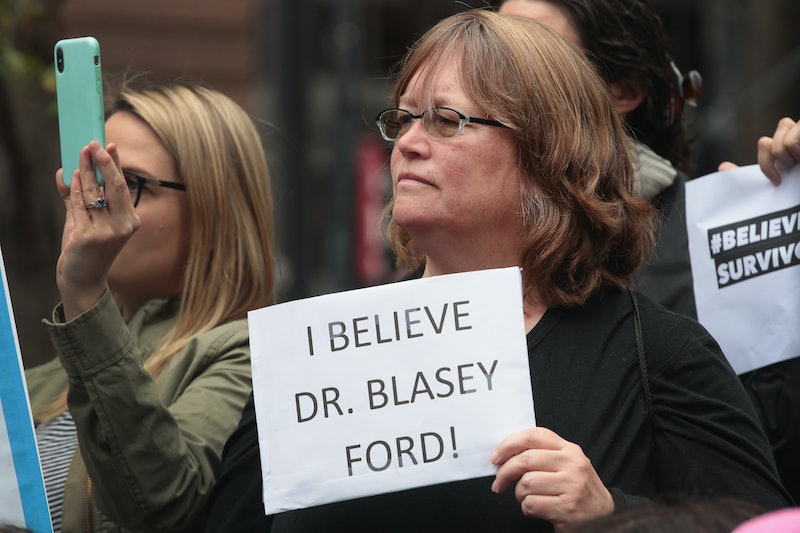 On Saturday, the Senate voted 50-48 to confirm Brett Kavanaugh to the Supreme Court after a contentious month of public testimonies and meetings. After it was clear that Kavanaugh had the votes to be confirmed, people began sending tweets to Christine Blasey Ford to thank her for coming forward with her story — and to apologize that the confirmation went forward regardless.

Ford had initially intended to come forward silently, she said. She told her local representatives before Kavanaugh had been announced as President Donald Trump's nominee in July that Kavanaugh had allegedly attempted to sexually assault her at a gathering when they were in high school in the '80s. (Kavanaugh has denied the allegation.) However, despite her wishes for confidentiality, her name apparently became known to reporters in early September, which is when she decided to come forward in an interview with Emma Brown at The Washington Post.

"Why suffer through the annihilation if it’s not going to matter?" Ford said to Brown, explaining why she didn't want to come forward publicly. Her allegation, she thought, would not stop Kavanaugh from being confirmed. In that, she was right, and it was that sentiment that drew people to send messages of apology to her on Twitter.

Ford wanted to be confidential in telling her story, and she ended up becoming a nationally-known name. On Sept. 27, she testified publicly before the Senate Judiciary Committee, spending hours answering questions to the Democratic senators on the committee and to a prosecutor the Republican senators hired to question her. A day later, the Senate Judiciary Committee voted on party lines to move Kavanaugh's confirmation forward to the full Senate, although Sen. Jeff Flake (R-Arizona) requested a week for an FBI investigation.

Both the committee vote and the full Senate vote fell mostly along party lines, and many people on Twitter addressed Ford while commenting on the state of the Senate, which currently has a Republican majority. In some of these messages, people vowed to work to flip the majority in Ford's honor.

The FBI investigation concluded this past Wednesday, and senators reviewed the findings throughout Thursday and Friday. On Friday, the Senate voted on cloture, limiting debate on Kavanaugh's nomination. After that vote, senators took to the floor to debate, but most eyes were on Sen. Susan Collins (R-Maine). Finally, on Friday afternoon, she addressed the Senate floor, saying that while sexual assault survivors should be believed, the FBI investigation findings did not convince Collins to believe Ford's allegation that Kavanaugh attempted to assault her. Collins announced that she would be voting in favor of Kavanaugh's nomination, effectively ending the conversation on if he'd have the votes.

While many people sent messages of regret to Ford, others wrote on Twitter to thank the psychology professor for her courage in coming forward with her story, especially because of the conversations that her testimony spurred.

People also took the time to thank the many other people who came forward with their own stories of sexual assault in the wake of Ford's testimony.

Ford's testimony did not stop Kavanaugh's confirmation from steamrolling forward, giving him a lifetime appointment to the highest court in the land, where he will now be deciding on cases that determine the rights of women across the country for years to come — and likely past this president's term and the terms of some of the senators who voted him in. Ford's testimony did not change the results of a Republican majority. But her voice was heard, and people are determined that it will not be forgotten to create change for survivors in the future.