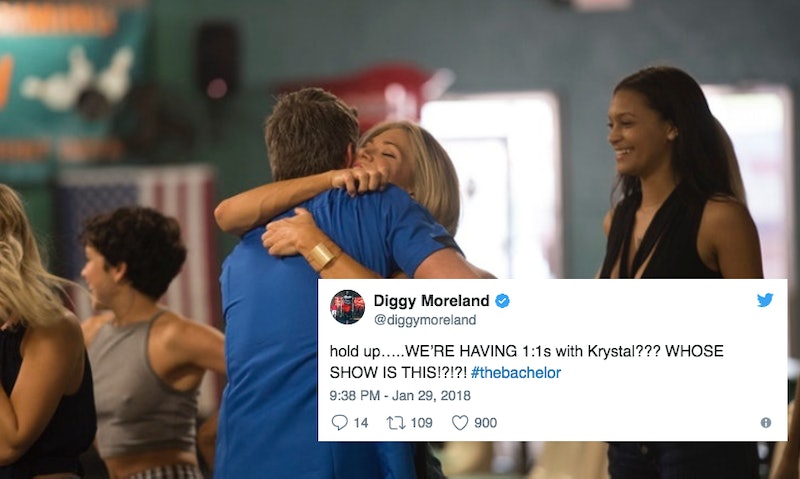 Monday's episode of Krystal's Bachelor — I mean, Arie Luyendyk Jr.'s Bachelor season was the most dramatic yet. From Krystal's motivational toasts to her protesting the date and everything in between, tweets from Week 5 of Arie's Bachelor season show that the viewers want Krystal gone. Well, they wanted her gone during Monday's episode, but now that Arie (begrudgingly) gave her the rose, the fandom is waiting (and hoping) for her to go home during the next episode.

During a bowling date, Arie promised that the winning team would get to spend time with him at an after party. Obviously, Arie caved and invited both teams to the after party, a "surprise" move that the lead pulls almost every season. Absolutely no one should have been surprised by that, but Krystal was both shocked and offended — aka overreacting. She called Arie a liar, started packing up her clothes, and skipped out on the second portion of the date, before weirdly showing up later, and then ultimately leaving again.

At this point, The Bachelor really is The Krystal Show, and it's not in a good way. She even had one-on-one time with almost every women in the cast during the cocktail party. Isn't the Bachelor the only one who is supposed to be doing that?

Krystal annoyed the entire cast (including Arie) and a lot of the fans. On the bright side, she gave everyone a lot to tweet about.

1. She Is Always Giving A Speech

Did Krystal give an insincere speech for every single day she was there? It feels like she was always leading a group prayer or giving a toast out of nowhere. No one is moved, Krystal. Absolutely no one.

2. She Was Obviously Getting The Rose

Thanks for spoiling the episode, ABC. Showing Krystal on a date with Arie in Paris makes it painfully obvious that she was getting a rose. Why couldn't they wait until THE END of the episode to show that preview?

3. She Couldn't Outdo The Naps From Last Season

At least Corinne wasn't taking away from anyone's time with Nick while she napped. Arie left the women who actually showed up for the group date to talk with Krystal.

Bachelor contestant Astrid Loch gave a shout out to Taylor Nolan from last year's Bachelor season with Nick. It would be wild if Taylor and Krystal were cast on the same season. Taylor would have sooo much to say.

5. She Actually Boycotted A Date

This actually did work. She got one-on-one time with Arie and completely stole the spotlight during the group date... yet again.

Krystal bothered her fellow contestants, the viewers, and even Arie.

Maybe Real Housewives is more her speed? Krystal would thrive walking out on events and insulting her fellow Housewives.

Krystal had a temper tantrum when Arie changed his mind, so she responded by doing the exact same thing. Makes sense.

9. She Took Over The Cocktail Party

Now the are waiting for a chance to steal Krystal for a second at cocktail parties? Is this going to happen every week? Will Krystal start handing out roses too?

Even though Arie should have just sent Krystal home, he did have a cool moment when he shut her down during their conversation at the cocktail party.

Her mom working in a bowling alley when she was a kid was her excuse for taking over and ruining the group date? That pales in comparison to bumper car and puppy trauma from previous episodes. Nice try Krystal, no one is accepting this excuse. Well, Arie did since he gave her a rose, but no one else is on board.

12. Arie Did Not Seem Enthused To Give Her That Rose

Arie looked beyond uncomfortable when he called out Krystal's name during the rose ceremony.

There's no way that Arie actually wanted to give Krystal a rose. Right?!

14. Did Arie Get A Bonus For Keeping Krystal Around?

A pay raise is the only suitable explanation for Arie giving her a rose.

Krystal has overstayed her welcome. At first, the drama was entertaining, but now it's time for a love story and she needs to go.