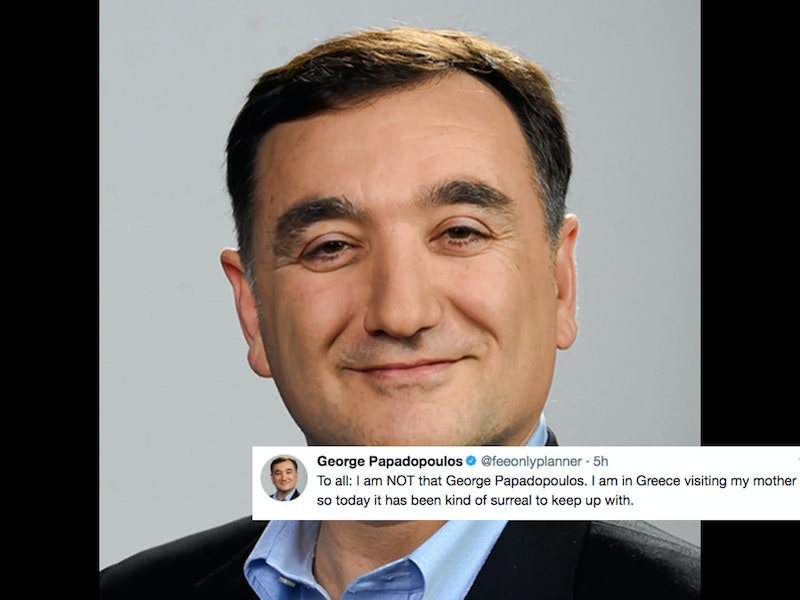 Papadopoulos is currently visiting his mother in Greece and staying in their family home with "spotty WiFi." When the news about the Robert Mueller investigation broke, Papadopoulos was having lunch with his mom and received a "deluge of messages" on Twitter following the news that Trump's foreign policy adviser entered a guilty plea and admitted to lying to the FBI about his contacts with Russia.

"To see your name next to words like 'indicted' and 'pleaded guilty' was quite a shock," Papadopoulos tells Bustle. "I have never been in trouble with the law, and I am currently visiting my elderly mother in Greece, and I would really have liked to have another normal Monday. Not the deluge of messages on social media I have been getting non-stop all day!"

Papadopoulos, a financial planner and CPA from Novi, Michigan, has been responding to people all day who have mistaken him for Trump's former adviser, and even noted in another Tweet that the name George Papadopoulos is very common in Greece. Papadopoulos says that he has been in Greece helping his mother with going to doctors appointments and moving into a new place.

"When the news hit, the responses were aggressive towards me," Papadopoulos says. "I do remember one telling me I am going to jail. And another one telling me I won't be able to wiggle my way out of it. Thankfully, I happened to be online shortly after the news hit and posted a denial tweet, which went viral. After this the responses were mostly supportive and understanding of what I must be dealing with. And I tried to make the best of it and have some fun along the way."

The unsealed court documents on Monday revealed that Trump adviser Papadopoulos had been trying to set up a meeting with Russian officials about the election. One of the emails included Paul Manafort, who was indicted on 12 charges including conspiracy, on Monday. "We need someone to communicate that DT is not doing these trips," the email said, according to the documents released to NBC. "It should be someone low level in the campaign so as not to send any signal."

Trump named Papadopoulos as a member of his campaign team in March 2016 and even called him an "excellent guy," according to The Washington Post. The former Trump campaign member admitted that he had lied, downplaying a conversation he had with a "professor living in London," now revealed by The Washington Post to be Joseph Mifsud of the London Academy of Diplomacy. Mifsud had told Papadopoulos that Russians had "dirt" on Hillary Clinton.

"I am sure they would like to know what dirt on Hillary Clinton he had to pass around from the Russians, but I can't help at all, as I have never been to Russia even!" he tells Bustle.

Papadopoulos stresses that while the situation was due to "an unfortunate mistaken identity," that didn't stop him from having a little fun with the replies. "I am NOT that guy!" he wrote in another Tweet. "Visiting my mother in Greece now and can assure u I am getting so fat eating the dishes she makes me...so no wiggling :)"