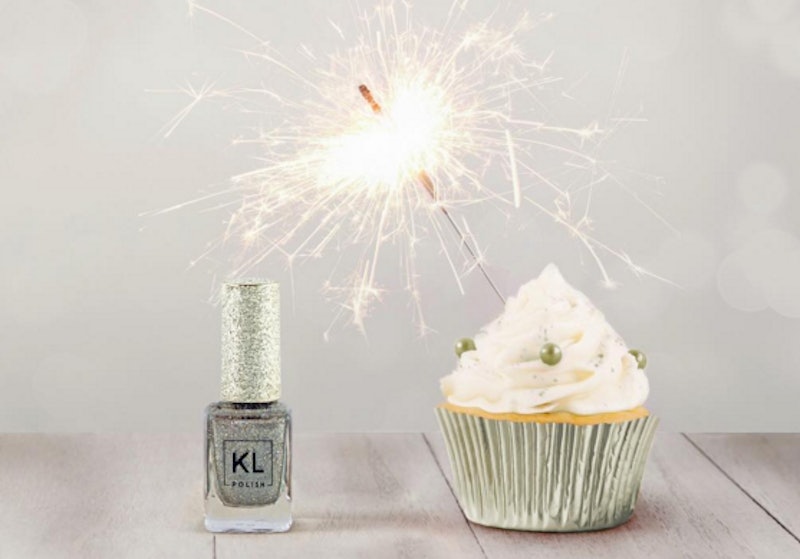 KathleenLights is a favorite beauty vlogger of many for a reason. She keeps it real when it comes to beauty and skincare advice, and she’s created some pretty bomb beauty products herself. So, if there’s one person you can trust to take makeup tips from — it’s definitely her. She just announced that the KL Polish "Das Esspensive" shade is launching soon, and her fans can’t wait for their next manicure.

Most of the folks on Twitter seem to be responding to two major components of this polish: A, its name, and b, its amazing sparkly formula. You see, KathleenLights is known for saying “das esspensive” on her channel because she's definitely not afraid to talk about price. She’ll never promote a product without saying how much it's going to cost because let’s be honest — that’s a major factor for everyone. So, her subscribers couldn’t be happier to see something that looks super “esspensive,” but will likely only retail for $8.50, like the rest of the polishes in her line.

Das Esspensive is a limited edition shade coming out in honor of KathleenLights’ 25th birthday, so naturally, it’s just what you need to be party-ready. It’s a silver-y hue that’s packed with glitter, and once you’ve seen it on, you’ll know exactly why people are freaking out about it online.

This special item is limited edition and won't be around for ever. So, be sure to shop it as soon as you can!

It's hard not to hear her voice in your head when you say this catch phrase!

The level of excitement surrounding this release is unreal.

Some people are pretty sad about its limited edition status. It's too good to see it go.

People are willing to spend their money on this, that's for sure.

Be prepared for the Feb. 13 launch date.

It just doesn't get better than having your manicure match your favorite thing to say.

People are demanding an entire collection!

It just doesn't get more "KathleenLights" than this.

It's is just too good.

Just in case you needed an extra dose of KathleenLights saying, "Das Esspensive," here you go. You can thank me later!

Be sure to shop this product the moment it drops because I have a feeling it's going to sell out quickly.