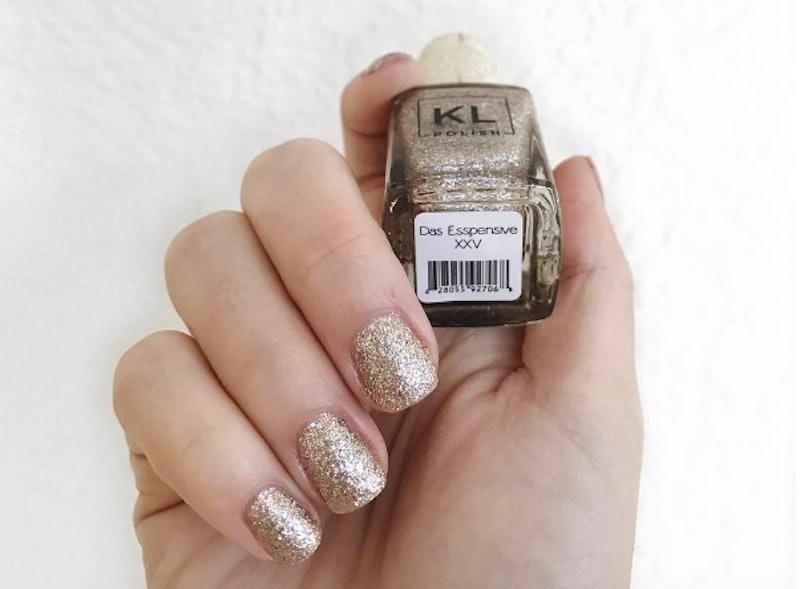 Get those wallets ready, because a new KL Polish shade is almost here. Kathleen Fuentes, aka KathleenLights, announced the latest KL Polish shade on her birthday, and fans were instantly obsessed. It's for a good reason too, because this shade is like nothing you've seen before. When is KL Polish's Das Esspensive available, you ask? You don't have too much longer to wait for the limited-edition shade.

Fuentes' nail line might have just launched, but she's proving that she's got a whole lot in store for fans. The YouTuber started her line with six gorgeous polish shades, but her latest is a little different than the rest. In honor of her 25 birthday, Fuentes came up with an opaque silver glitter polish call Das Esspensive. It's the nail shade that you never knew you needed in your life.

According to the KL Polish Instagram, Das Esspensive will be available on Feb. 13 at 11 a.m ET on the brand's website.

You'll want to set those alarms, because this nail color is limited-edition. According to Fuentes' Instagram caption, once these bottles are sold out they will be gone for good. That means no restock, so you should probably be sitting by your computer when these go live.

Have you ever seen a more beautiful glitter polish? I think not. Fuentes said on Twitter that, despite the name, Das Esspensive will be the same price as all the other polishes. That makes the new launch $8.50. That's a small price to pay for this much shine. There's no word on how many you'll be allowed to buy, but you should probably stock up while you can.

KL Polish is having a giveaway on their Instagram, if you're looking to score one for free. All you have to do is follow the brand on Instagram and tag two of your friends below the photo. They'll be giving away six bottles on the day of the launch, so your chances are a bit higher.

Seeing as KL Polish sold out during the presale and on official launch day, something tells me that the nail color won't be around for long. Good luck getting your hands on one, and may the beauty odds be ever in your favorite.