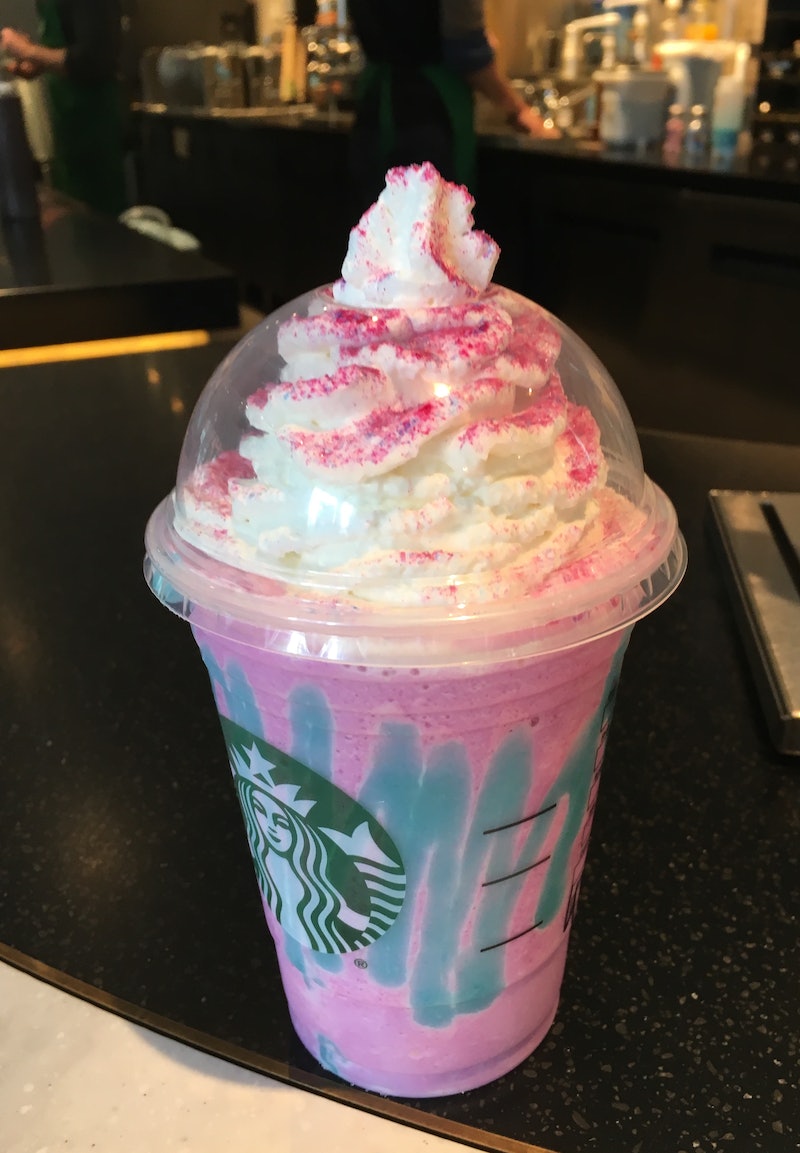 The first day Starbucks' Unicorn Frappuccino hit stores, eager crowds gathered to purchase one of the mostly hotly anticipated things we've seen in recent history — and then, naturally, they immediately went to post their responses on social media. For those yet to try the magical beverage, the Twitter reactions to the Starbucks Unicorn Frappuccino are at once hilarious, honest, and informative. Despite all the hype surrounding the new frozen drink, there are still so many questions yet to be answered. Is the Unicorn Frapp as impossibly beautiful as it appears? Is it possible to taste the sprinkling of unicorn magic throughout? Would Twilight Sparkle be proud? You can always count on social media users to give you their no-holds-barred opinion on the latest fad or breaking news, and a quick perusal of your Twitter feed will show you what people really have to say about the sweet-then-sour, limited-edition drink.

The Unicorn Frappuccino is available at participating Starbucks stores throughout the United States, Canada, and Mexico from Wednesday, April 19 to Sunday, April 23 while supplies lasts — meaning fans of the mythic horned creature have only a brief window to find out for themselves what the magical beverage tastes like. With a 12-ounce Tall Unicorn Frappuccino available for under $5 and with zero milligrams of caffeine to worry about, there's no reason for Earth-bound fellow unicorns to not try the drink.

For those who haven't caught a glimpse of the brightly-colored beverage yet, the drink appears purple at first, with a base of crème Frappuccino blended with mango syrup. Stripes and swirls of sour blue drizzle line the inside of the clear cup, giving the drink its two-tone appearance... but that's just the start of the magic. As the two components mix together, the drink changes color and flavor, the purple fading to pink and the taste transforming from "sweet and fruity" to "pleasantly sour" (or so the drink's menu page states). The whole thing is topped with rich vanilla whipped cream and dusted with pink and blue sprinkles, pushing the limits of taste and imagination.

Those who tried the Unicorn Frappuccino on Day 1 fell into a number of camps when rating the taste, experience, and their deepest feelings. This is what the people of Twitter are saying about the hotly anticipated drink of spring:

Some Will Go To Great Lengths To Get Their Hands On One:

While Others Are Perhaps Uninterested In The Drink:

Many Just Want To Gaze At Its Magical Beauty In Wonder Instead Of Consuming It:

Though Once They Do Take A Sip, Figuring Out How To Describe The Taste Is A Bit Difficult:

So basically candy in a cup? Sounds pretty good!

It Didn't Take Long For Some Twitter Users To Hit A Sour Streak:

Who knew unicorns could be so tricky?

Others Just Couldn't Resist Bringing It All Back To Harry Potter:

Finally, Some Responses Were Just Too Cute For Human Eyes:

Try the Unicorn Frappuccino through Sunday, April 23, and see for yourself what sparkles, magic, and mango tastes like when mixed together!